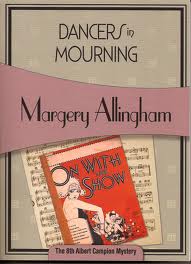 Dancers in Mourning, by Margery Allingham

I don't think I've said anything about Margery Allingham here, but I love her books.  She wrote a lot of them, very fun mysteries (and plenty of other stuff too; she wrote for magazines a lot) usually starring Albert Campion as the detective.  Campion is your eccentric kind of detective, who hides a clever mind behind a vacuous and foolish exterior.  He has something of a secret identity, and there are references to his real name being Rudolph and a wealthy background.  If he reminds you of Lord Peter Wimsey, there is a reason for that, since he was reputedly created as a sendup of Lord Peter.  I haven't had a lot of luck getting many Allingham stories, so I'm happy now because I just got a pile of them.

In this story, Campion is called in to deal with a theatrical problem.  The famous Jimmy Sutane is starring in a popular show, but he's being quietly persecuted with nasty practical jokes.  Sutane is highly-strung and the pranks are driving him mad as well as endangering his career.  Campion spends a weekend with the whole cast at Sutane's country retreat, but a dancer--Chloe Pye--turns up dead.  Then the understudy is blown to smithereens.  It's quite a confusing mystery, but I spotted the killer before Campion did (since he's letting his emotions cloud his judgment, unusual for him).

Allingham has a very distinctive style.  She's not a great writer, but she's good at difficult mysteries and her stories have more variety than many others (in my opinion, anyway).  I plan to be quite happy reading my way through my pile.


In other news, I'm most of the way through 3 difficult books, and I'm thinking of doing that 15-day Book Blogging Challenge, but I don't know.  Some of the questions seem awfully difficult to answer!