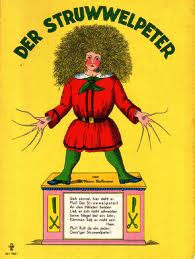 Finally, I read another book, this time in German.  Struwwelpeter is right about my speed, since I haven't studied German in years and years--I quit after two semesters to take Russian.  Quite a few words were a bit old-fashioned, but I mostly did OK.  I also found an English version online to compare them---I read the German first and then the English--but of course the English version had been rendered into rhyme, so it mostly wasn't the same words.

Although I read a whole lot of nursery rhymes and cautionary tales as a child, we did not have Der Struwwelpeter.  I shouldn't think very many American children do, but the older British novels I've read often make a passing reference to the stories in here, so it must have been pretty well-known in the UK in the past.

These are cautionary rhymes in the traditional 18th- and 19th-century style--that is, children misbehave and are hideously punished, and everyone enjoys the wholesome fun and violence.  Peter never cuts his hair or nails, and nobody likes him; Friedrich is cruel to animals, so the dog bites him and he has to stay in bed and take nasty medicine while the dog eats his lovely sausage and cake.  Pauline plays with matches and is burned to death!  (This was a real danger, when matches were more flammable than they are now and people wore voluminous clothing.)  Three naughty boys make fun of a "Moor" and are punished.  A hare turns the tables on a hunter--I think I just met the original Bugs Bunny? 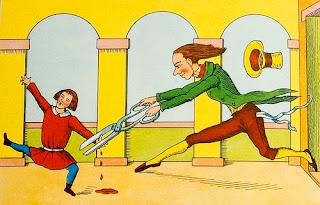 The really scary one was about poor Konrad, who sucked his thumb and got his thumbs snipped off by a tailor.  Agh.  We former thumbsuckers cringe in sympathy.  And Kaspar is a picky eater:

I liked that one.  There is something about the rhythm of some German that I like, and that hits the spot.   There are a few more stories, but I'm getting boring now.

I broadened my knowledge of 19th-century children's literature, and practiced a bit of German.  Not bad!