I just heard about this readathon today from Emily at Classics and Beyond.  My Shelf Confessions has a yearly readathon in summer.  It's a week long, starting tomorrow, and certainly I need some motivation to tackle my books a bit more!  I have a huge pile of books right now, but have not been reading enough (lots of great sewing though)--instead, there's been too much time spent online.  So, though I have quite a busy week coming up--who doesn't?--I'm going to make an effort to pick up a book rather than puttering around on the Internet.  It's going to be quite hot this weekend, so it would be a good time to sit by a fan and read! 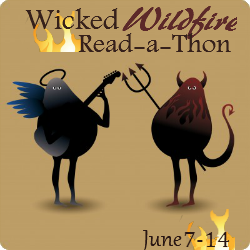 I've been working my way through Pamela, and aiming for about 50 pages a day.  This is not terribly fast, but I can only take so much of her.  It's very repetitive, every detail is described ad nauseam, and Pamela is so humble and grateful that she makes Esther Summerson from Bleak House look like a Mean Girl.  I am really wondering how Richardson is going to stretch this out for another 500 pages or so...meanwhile, I balance Pamela with On the Road, which I'm enjoying.  The thing that always surprises me (pleasantly) about Jack Kerouac is that he seems to like just about everybody.  Everything is interesting.  On the negative side of the scale, women exist mostly to look pretty and cook a bit.  Everybody complains about C. S. Lewis' sexism, and everybody loves Kerouac, but guess which one was the waaaay more sexist of the two?  I mean, fine, that's what the culture was, I can live with it, but let's not castigate some people and let others off for the same thing.

Ooh, speaking of which, I came across a blog post today.  Hm, I want to quote the entire last paragraph, but I haven't asked for permission (since I only just now thought of it).  So I will just give you the link and tell you to read the last paragraph even if you don't read the whole thing.  It's a pretty specific audience he's speaking to, but that last bit can be usefully read by any serious reader.  This is from George Handley's blog, Home Waters.  Which I have not read except for this one post, but I should; after all we had the same major.

I'm so glad you found us and decided to join! we also do random rats sometimes. I think we do two Wickeds a year haha. I hope you like my jigsaw challenge! there are 3 challenges up already!

I'm glad you decided to do it! (I saw your comment on my blog before I saw this post, so I'm a bit behind the times...) Here's hoping we both get the chance to read as much as we want to!

I'm in the middle of On the Road and was a little miffed by the portrayal of women too. It's very readable though.
The article was excellent. I'm LDS, and appreciated the whole thing, but especially his closing thoughts.
Have fun with this readathon!