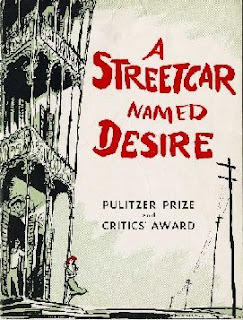 This was my Classics Club Spin title for this month.  I've never read any Tennessee Williams, but I've been wanting to for some time.  I got the Library of America volume of Williams plays, 1937-1955, and I figure I'll read The Glass Menagerie too.

Wow, what a play.  I hardly even know what to do with it; it's so different from what I'm used to.  I presume that everyone knows how it goes, but just in case, we have Blanche arriving at her sister Stella's apartment in a poor section of New Orleans.  Blanche works very hard at keeping up an image of a delicate and virtuous Southern lady, fallen on hard times, but it soon becomes obvious that she suffers from alcoholism and mental instability.  Stella has married--far out of her own background--Stanley, an earthy and violently dominating  man.  He is abusive, but their chemistry is the basis for their relationship.  Stella is going to have a baby as well.

Blanche and Stanley don't get along and the friction between them worsens as Stella's pregnancy progresses.  Blanche claims to just be having a little rest from her teaching job, but as Stanley finds out, she has in fact been fired for an affair with a student, and it sounds as though she's been turning tricks on the side.  She is now hoping to marry Stanley's friend Mitch, but Stanley puts a stop to that and tells her to get out.  Their final clash ends in Stella's complete breakdown, and Stanley commits her to a mental hospital as Stella walls off her thoughts in order to stay with Stanley.

It's tragic, and realistic; since most of my drama reading has been older material, I'm not sure I've ever read a tragedy that was something that could also really happen.  So, a whole new genre for me, and a great play.

I read this one earlier in the year (March or April, maybe) and really loved it - much more than I expected I would. Wish they hadn't ruined it in the film, as that had all the potential of being a great adaptation, with that cast (and it was a good adaptation and a good film, they just strayed too far in some places... sensitive censors and all that).