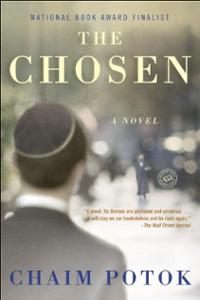 The Chosen, by Chaim Potok

A newly-formed book club I'm joining picked The Chosen as one of the first books we'll read.  I was happy, because it's on my CC list even though I know just about nothing about Chaim Potok.  When I started it, and it spends 30 pages on a baseball game, I was pretty trepidatious about the whole thing, but my husband said he had really liked it in high school, so I kept reading and pretty soon I was hooked.  I really enjoyed this book a lot.

The story starts in 1944, just as D-Day and the invasion of Europe is starting.  It's narrated by Reuven, an Orthodox Jewish teenage boy--he meets up with Danny, who seems at first to be destined to be his arch-enemy.  Danny is Hasidic, and a baseball game between their two teams turns ugly.  Reuven winds up in the hospital, and that's where he and Danny begin a friendship that they both need--but Danny most of all.

The amount of studying these boys do is phenomenal.  They both work really hard all the time at their studies, and Danny is a true genius.  His future is completely mapped out for him; as the older son of his community's leader, he is expected to take his father's place.  Reuven, however, cannot understand Danny's relationship with his father at all.  Reuven and his own father are very close--they study and talk together all the time--and in some ways Reuven's father takes on that role with Danny, too.  Then, as news of the Holocaust begins to come out of Europe, and the Zionist movement gains momentum, things get more complicated.

This is a truly great novel about fathers and sons and love.  And, unlike much of the material I've been reading recently, it was not unremittingly tragic!  So that was nice for me.  I would really like to read more Potok now, and I'm happy to have found a new author to love.  Book club is tonight!


I have lots more books to tell you about, and I'm still enjoying In the First Circle too, so more posts soon.
classics