The Darling Buds of May 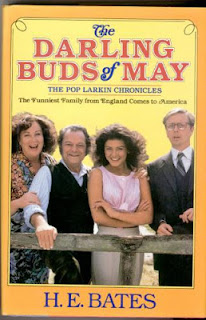 The Darling Buds of May: the Pop Larkin Chronicles, by H. E. Bates

This is really a collection of three short novels: The Darling Buds of May, A Breath of French Air, and When the Green Woods Laugh.  I don't know if that makes up all the Pop Larkin books or not.  They're set in the English countryside, in the 1950's, and they're pretty much a celebration of all things English, country, and summer.

The Larkins are a large family on a farm, and they have a lot of fun. Upper-class inhibitions and hang-ups are unknown.  Food and drink flow continually.  Pop does deals and makes a lot of money one way and another, and in the first story a tax collector shows up to get him to fill out his tax forms, but the family simply absorbs him.  He stays forever and marries the oldest girl, Mariette.  Then they all spend the summer in France, and finally there is a summer involving a neighboring manor house, a new swimming pool, and a lawsuit.  Pop makes a stir wherever he goes, and Ma is always ready for it.

They're fun stories, and very different from most English literature I've read.  I did feel that the prose could get a bit repetitive (Ma is consistently described as jelly-like), so maybe it would have been better to read the books separately, but since I got it from a library in the next county over, I thought I'd better read it all while I could.

The BBC made a TV series from the books in the early 90's, and I sure would like to see some of the episodes.  Catherine Zeta-Jones played Mariette; it must have been one of her earliest roles.  She does indeed look exactly like Mariette does in my head.  I can't find any clips around the Internet, but I just did a quick little search, so maybe it's out there to be found.
comedy