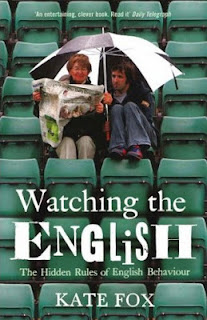 Watching the English: the Hidden Rules of English Behaviour, by Kate Fox

I have finally found people who dislike talking about feelings even more than I do!  At least, if you believe Kate Fox, an anthropologist who spends her life studying her own tribe: the English (not the Welsh or the Scottish or anything but English; that would be a different book again).   Here, she tries to work out a primer for being English--she describes how people behave and develops a list of unspoken rules, ending up with a sort of diagram describing the central characteristics of Englishness.  She's doing this for an English audience, not for others, and as a result she doesn't try to play up good points of being English, which makes me feel kind of weird about writing this post.  I would really like to live in the UK for a year or so myself, so English people, do not blame me for the content of this book!

This was my last ILL of the year before school is over and it turned out to be about twice as long as I expected--over 400 pages, with tiny print.  So I read fast.  Fox describes, at length, various aspects of English life; there are sections on talking about the weather, pub behavior, work, romance, leisure, rites of passage and so on.  English humor and class consciousness are so thoroughly ingrained into every aspect of life that they don't really get chapters; they are just everywhere.  She is sometimes a bit repetitive, and often funny (being English and all).

She explains why English people talk about the weather all the time, treat their pets like royalty, and are really good at queueing by taking apart behaviors and figuring out the underlying reasons.  Weather is a good topic to smooth over greetings, lulls in conversation, and any awkward spots, for example.  Queueing is an illustration of a concern for fairness at all times.  Her theory is that the central characteristic of English people is "social dis-ease"--that is, not being terribly comfortable with social situations and a lack of skills to negotiate them smoothly.  (This seems less than flattering to me, but don't blame me, I didn't say it!)  From this spring the other major characteristics of Englishness: a use of humor at all times and in all places, an insistence on fair play, an obsessive need for privacy, a preference for the unspoken and indirect, and several other characteristics.

Fox can get a bit exasperated by some of these traits, while simultaneously acknowledging them in herself.  She sometimes wonders why she can't be straightforward for once, without the constant use of humor as a shield.  She points out that the English dislike for money-talk can be a bit self-defeating in a business context, and that the famous self-effacement and modesty is often a roundabout way of making sure that people know your accomplishments and how modest you are about them.

By the end I was resolving to be more straightforward and direct about my feelings. It's an interesting book and pretty entertaining, but since I've never lived in England I'm not sure how correct it is.  English people will have to let me know their opinions.