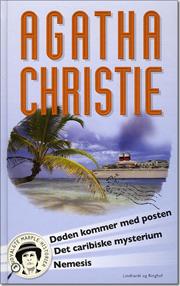 I feel so cool!  For the first time in about 20 years, I read a novel in Danish.  It was "Det caribiske mysterium," or The Caribbean Mystery, by Agatha Christie.

At first it was quite slow going; I almost had to read aloud in my head to make sure I was paying enough attention to each sentence and not skimming.  But it wasn't too long before I was doing much better and reading a little bit faster and much more comfortably.  The Danish part of my brain responded to a good workout (and presented me with several weird dreams in Danish, which happens anyway sometimes, but not usually so many at a time).

The funny part was that I am so familiar with how Agatha Christie wrote in English that I almost always knew exactly what the original would have said.  That may have helped me understand the story, I don't know.  I would like to try a non-English author to see--I don't have a large collection of Danish books, but I did find the book I was originally looking for, "Stjernen uden himmel" (The Star Without a Sky, about a Jewish boy in WWII), which I rather think was originally written in German.  The only really Danish books I have are Literature--Niels Lyhne, Den Afrikanske farm, that sort of thing.