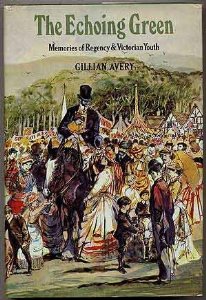 The Echoing Green: Memories of Victorian Youth, by Gillian Avery

This is a great book!  Gillian Avery collected the life stories of nearly 20 people who grew up during the Victorian era, and put them together here.  There is a really nice variety; children of all classes and circumstances and locations are mixed together so that the reader gets an impression of the conditions all over the UK.  A few include:

a girl from a strict Quaker family,
a boy who lived in a workhouse (makes Oliver Twist look cheery),
a boy who worked as a navvy at the start of the railway era,
a Northern Irish Catholic boy,
a Scottish girl who was wealthy until her father squandered it all,
a miner boy,
one of Queen Victoria's choirboys,
a 'ragged school' boy who was shipwrecked,
an emigrant to America.

My copy was called "Memories of Victorian Youth," but really it goes right back to Georgian times and the main focus is on the first half of the 19th century.  The Great Exhibition occurs nearly 70% of the way through.  But it does go right up to Victoria's Jubilee and her death.

You see tremendous change in a nutshell; the first few entries describe a land that has hardly changed in centuries for many residents.  Ordinary country people hardly leave their home villages and travel is difficult.  The incredible poverty of early Victorian England--thousands of beggars in the cities, food prices so high that ordinary people routinely went hungry, no work to be had--comes through very clearly.  It's no wonder so many people emigrated; Avery talks about letters from America as describing food with awe, because here was a country where everyone could eat meat every day.

Then as the Industrial Revolution takes hold, everything changes; work is plentiful but dangerous, travel becomes commonplace, and "modern girls" get educations and jobs.

The book is liberally illustrated with pictures from the period that kind of go with the text.  There are no photographs of the people in the book or anything like that; all the pictures are strictly thematic.  They add some very nice touches and I must say I enjoyed the "Railway Alphabet" from some child's library.

It's all very interesting and educational, so do read a copy if you run across it.  It's from about 1973, though, so good luck.
TBR challenge Victorian