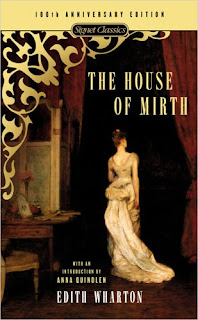 The House of Mirth, by Edith Wharton

I've been reading this along with the WEM Ladies.  I only discovered Edith Wharton last year, and I was happy to get another one to read.  I've got The Custom of the Country waiting, too!

This is the story of Lily Bart--beautiful, graceful, and socially talented.  She has been brought up to ornament New York high society, but she has no money of her own; she lives with an aunt and makes herself useful to her friends in order to keep up appearances.  She needs to marry a rich man, and somehow she never quite does.  Now that she is 29 the case is becoming urgent.

Lily is honestly pretty hard for me to like.  She is confident that she deserves to be rich, which is never an attractive quality to me.  All of her life is spent pleasing wealthy people so that she can be in on their society.  She has every intention of selling her soul---her saving grace is that she can't quite do it.  She also can't stop trying.  Imprisoned by her love of luxury and her conviction that she deserves to be rich, she can't imagine or tolerate any other existence.

The interesting thing is that the high society she longs to rule--the group of people she spends all her energy on--is almost entirely awful.  When I read Vanity Fair a while back, I said:


Thackeray sets [Becky Sharp] in company with leering old men and jealous women, most of whom are in nearly as much debt as she is. The ton of England is satirized as Vanity Fair, a constant tussle of people who care for nothing but money and appearances, trying to cheat anyone they can.

This is exactly what Wharton does with Lily and New York society.  The men are nearly all horrible; the married ones are greedy, repulsive, and salacious, while the younger ones are quickly becoming corrupted.  The women are mostly backbiting and selfish.   High society is Vanity Fair, empty, valueless, and even dull.  Lily spends a lot of money (that she doesn't have) and works very hard to live there.

The exceptions to this rule for the men is Lawrence Selden, who is as moral a man as exists in this world.  He is not wealthy, and he loves Lily--sort of, but he's useless.  Every time he has a chance to help Lily when she is in trouble, he chooses to believe the worst of her and disappears instead of giving her the aid she truly needs.  He never gives her an opportunity to tell him the truth about herself.

Gerty Farish is the best of a few decent women in the story.  She is an independent New York girl, earning her own living--which is pretty meager, but she truly loves Lily (despite being given every reason not to) and is the only person who sticks by her.  Gerty is the real heroine of the story

I came to think of the title House of Mirth as another term for Vanity Fair, and when I looked it up, I found that it comes from Ecclesiastes 7:4: The heart of the wise is in the house of mourning; but the heart of fools is in the house of mirth.  Or we might also call it the great and spacious building without a foundation.  Or Babylon.   Every time, it's about a society that cares only for appearance, money, and amusement instead of things that really matter.