The Return of Captain John Emmett 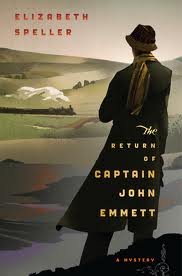 The Return of Captain John Emmett, by Elizabeth Speller

This is an extremely complicated murder mystery set just after World War I.  Laurence Bartram, veteran and widower lacking in direction, is asked by his old friend's sister to shed a bit of light on why the friend might have committed suicide.  Captain John Emmett was living in a sanatorium for shell-shock victims, but seemed to be improving; why would he commit suicide?  The more Laurence looks into John Emmett's life, the more puzzling that question becomes, and soon Laurence is discovering how very much Emmett hid from his family.

I'm feeling kind of lukewarm about this novel.  It wants to be a more serious and literary mystery than your average cozy British mystery, and that's fine, but the result is more verbiage than I was really interested in.  The mystery is pretty difficult to follow, though it resolves well enough.  But I felt like my interest was smothered a bit by those elements.  Meh.
Posted by Jean at 2:33 PM