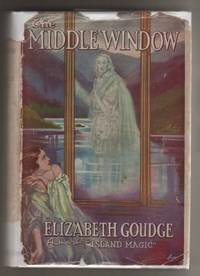 The Middle Window, by Elizabeth Goudge

Judy has talked her parents and fiancé into a holiday in Scotland.  Somehow she just knows she's supposed to go to Scotland, though she's never been there, and that her life is going to change completely.  But how is it that she knows exactly where to find the house they've rented?  Why is Judy suddenly assailed with someone else's memories, and why does the owner, Ian, seem so familiar?

I'm not even sure what to call this book.  It's a romance, but it's different--plus the lovers are hardly ever together.  It's part historical fiction, part ghost (?) story, and nearly all tragedy.  The first third is in 1934 and features Judy and Ian.  Most of the rest concerns Judith and Ranald as they are caught up in the 1745 Scottish Rebellion.*

It's a bit like those Gothic thriller romances by Barbara Michaels (aka Elizabeth Peters/Barbara Mertz), but better written and without a trace of Michaels' sardonic humor.  It is, in fact, unusually deep and well-written for a light romance novel--which is not a surprise for me, since it's Goudge, but it's interesting to see a book presented as a fluffy romance turn out to be more than that.

I have to say, this book would make a fantastic Bollywood movie if you translated the plot into Indian terms.  It's perfect.  Ten years ago it would have featured Aishwarya Rai and Hrithik Roshan, and for the historical part they would have looked pretty much like this.  Now I don't know who it would star, but it would be great!  (If any Indian film directors are reading this, I want credit for the idea and a modest fee.)

*Bonnie Prince Charlie seems to plague me lately, but this is the first time he's shown up in my reading.  My girls are learning yet another song about him on their violins, older daughter is reading Kidnapped and needed to know all the background...Jacobites just keep popping up in different ways.