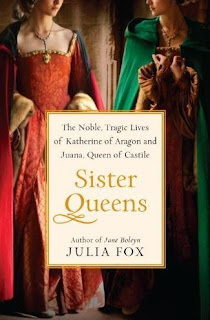 Sister Queens: The Noble, Tragic Lives of Katherine of Aragon and Juana, Queen of Castile, by Julia Fox

If, like me, your European history is a bit on the fuzzy side, you might be as surprised as I was to realize that Katherine of Aragon, Henry VIII's first queen and unwilling catalyst of the Anglican Church, was sister to Juana the Mad, a famously mad Spanish queen who...had something to do with the Hapsburgs, right?  Not only that, they were both daughters of Isabella and Ferdinand, the uniters of Spain, kickers-out of Moors and Jews, and sponsors of Christopher Columbus.  Since I hadn't realized any of that, I figured I'd better read this book.

Julia Fox gives us a truly fascinating look at England and Spain during the Renaissance and digs deeply to get to know Katherine and Juana on a personal level.  History and legend have covered up their personalities to a large extent, especially Juana's.

Katherine emerges as a political personality in her own right, even something of a mentor to Henry in the early days of their reign, when he was 17 and she was in her 20's and already experienced in the ways of political maneuvering.*  She was her parents' daughter, devoted first to her God and her husband (and therefore England), but to Spain's interests too.

Juana, however, is the more misunderstood sister, because as it turns out, she wasn't mad at all.  She married Philip II, king of the Netherlands, and because of the unexpected deaths of her older siblings, she inherited her mother Isabella's realm of Castile.  Philip's opinion was that his wife's lands were his lands, not hers, and arranged with Ferdinand to keep her out of the deal.  Soon after, Philip too suddenly died.  Juana was determined--for political reasons--that he would be buried in Granada, but getting there turned out to be more difficult than you'd think.  And before she could get the job done, her father Ferdinand had her confined to a castle, declaring her tragically unstable and unfit to rule, which allowed him to rule Isabella's lands as well as his own.  He kept Juana there for years, until he died, and then her son Charles V (who owned something like 70% of Europe)  kept her there too.  Juana spent 46 years trapped in her castle, almost never allowed even to go outside her rooms--and all the evidence points to her mental competency and devotion to family interests.

Pretty wild stuff.  Both sisters started off with promising careers and looked forward to brilliant political matches and to ruling in Europe just like their parents.  Both ended their lives oppressed and imprisoned, betrayed by their own family members.

It's a great book if you're interested in Renaissance history or women's history.  Plus you'll learn a lot about the family trees of the crowned heads of Europe.