Ake: The Years of Childhood 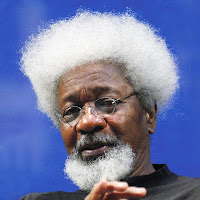 Ake: The Years of Childhood, by Wole Soyinka

This was my Classics Club Spin title!  It was great and I'm very happy with my luck.  I actually had this out of the library over the summer, but the first couple of pages didn't hook me in and I didn't continue, though I meant to read it properly eventually.  I'm glad to have gotten the chance, and I'll be trying out more Soyinka at some point.

Wole Soyinka, born 1934, is a Yoruba Nigerian.  He has been a vocal critic of dictators for a long time--by now he is world-famous for his writing on "the oppressive boot and the irrelevance of the colour of the foot that wears it."  His writing is very eloquent and written at a high level, to the point that he is sometimes criticized for being too difficult and obscure.  He won the Nobel Prize for Literature in 1986, the first African and the first black person to do so.  These days he is very elderly, but still going and currently focusing on religious tyranny, saying, "The blatant aggressiveness of theocracies I find distressing, because I grew up when Christians, Muslims and animists lived peacefully together." 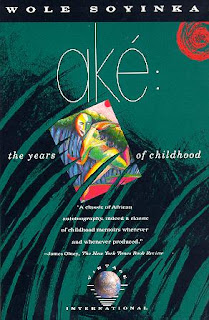 This is the story of Soyinka's very early childhood.  He must have been something of a child prodigy--he writes about insisting on starting school with his sister before his third birthday, drove his family crazy with questions, and worked his way through grade levels at top speed, leaving home for an elite secondary school at 11 or so (where this memoir ends).

It's not very easy to get situated in the book; Soyinka drops the reader directly into his early memories with no explanation.  He calls his parents by fitting nicknames that he made up, so I didn't know who they were at first.  It's helpful to find a bit of introductory material.  Soyinka's memory-stories are wonderful and fascinating, so don't let the initial confusion stop you.

In the latter part of the book, he is getting older and going to a more advanced school, preparing for leaving home.  There are some great stories about events at the school and around, but quite a bit of focus is actually on a women's group that got started to help with learning about child care, hygiene, literacy, etc. (it sounds exactly like my own RS group) but soon evolved into a group with political demands to improve the lives of women.

I don't suppose I've done a very good job of telling you about this memoir, but it is a really good read and I enjoyed it a lot.  It's certainly a classic of African literature; necessary if you enjoy memoirs of African life.  I got the title from a list I looked up--I think it was a list of 100 titles that were voted to be the best African works, and then there were 12 chosen as the tippy-top, and the books on my Classics Club list are from that--I have 10 listed and decided that I have to read at least 6 of them, in case I can't find a few or something.

Anonymous said…
I greatly enjoyed your wonderful review. I read Soyinka's play The Lion and The Jewel way back in school and have since not read any of his works. i would love to read Ake. You may try The Joys of Motherhood by Buchi Emecheta (a review of it is on my blog) which is considered an African Classic. Thanks for sharing this.
April 2, 2013 at 9:46 AM

Jean said…
Thank you! And I will certainly check out the Emecheta book--thanks for the recommendation. :)
April 2, 2013 at 3:24 PM