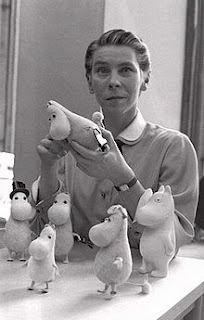 If you're European or Japanese, you may well have heard of the Moomintroll books, but Americans are woefully underinformed about the amazingness that is Tove Jansson and her Moomintrolls.  I came across them when I was 13 or so, which is a bit late, but I was lucky to have them at all.  I'm not sure how it happened, but I found some old battered paperbacks.  For anyone wishing to find copies in the US, you're in luck: new paperback editions were published just a couple of years ago!

Tove Marika Jansson (1914 - 2001) was born in Helsinki, to a family belonging to the Swedish-speaking minority in Finland.  They were a bohemian and artistic family (today they would be unschoolers!) and Tove started writing stories and producing artwork as a teen.  She continued to paint and write all her life and produced commissioned works of art for various clients.  She also ometimes worked in collaboration with her life partner Tuulikki Pietilä, a graphic artist. 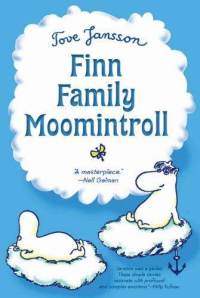 The Moomintroll stories started off as fun little diversions with highly adventurous plots, but later evolved into somewhat calmer stories with more personality and more nature.  Jansson created a large and diverse population for her stories: Moomintrolls, their cousins the Snorks, Hemulens, and the spooky Hattifatteners, not to mention characters like Little My, Too-Ticky, and my own favorite Snufkin.   I would recommend Finn Family Moomintroll as a good place to start, but it is not terribly important which order you read them in.

In 1966, Jansson won the Hans Christian Andersen Award for her work.

The books became very popular indeed.  There have been TV shows and toys and postage stamps (hopefully one featuring the stamp-collecting Hemulen!).  In Japan, you can buy a wide range of Moomintroll toys--I have a keychain.


Jansson also illustrated classic stories for Swedish editions, such as The Hobbit and Alice in Wonderland.  I haven't seen the Alice pictures, but the Hobbit illustrations are great--and you can see some of them here.
children's literature