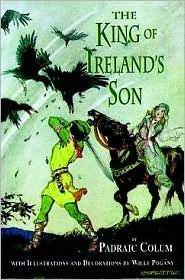 We're going to go back a bit in time again, to the early 20th century.  Padraig Colum (1881 - 1972) was born in a workhouse (!), but that was where his father actually worked.  After Mr. Colum lost that job, he  emigrated temporarily to Colorado while his large family stayed in Ireland.  Padraig was educated in Dublin and got a job there, but started writing on his own time.  He got involved with the Gaelic League, became friendly with Irish literary people like Yeats and Joyce, and collected folk songs.  Colum wrote plays, poetry, and founded a literary magazine too. In 1914, he and his wife went on a visit to the US, and it turned into a years-long stay. 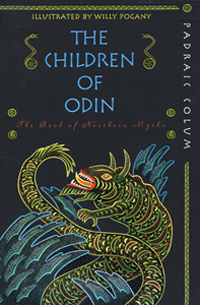 While in the US, Colum started writing for children, which is why we have this post now.  He started with The King of Ireland's Son in 1916, a long re-telling of an Irish folktale (if you're lucky you might find it in the children's room of your library--it's a good read-aloud).  Then he did more mythology and produced excellent re-tellings of Greek tales in The Tale of Troy, The Adventures of Odysseus, and The Golden Fleece, as well as Norse myths in The Children of Odin.  We have several of these books and they are great for middle-grade children. 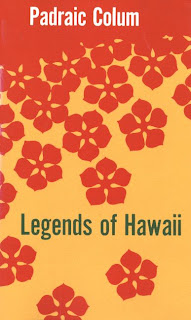 After that, Colum was commissioned to write collections of Hawaiian stories.  He produced three volumes: Legends of Hawaii, The Bright Islands, and At the Gateways of the Day.  I don't know if these were the first volumes of Hawaiian stories produced for non-Hawaiian children, but I think they may have been.

For many years, Colum and his wife moved between the US and Ireland, where they taught and wrote and wrote and taught.  Padraig Colum died at the age of 90 in 1978.  I hope you'll try out some of his works.  Also, I found out how to pronounce his name: it's Pau'drig Column.