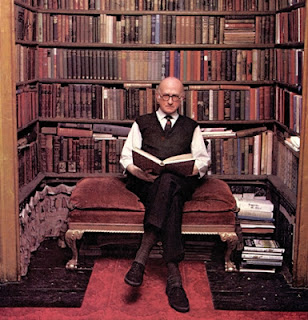 
Lancelyn Green studied literature at Oxford under C. S. Lewis and they became good friends.  He joined the Inklings* and was in fact the one to suggest the title "Chronicles of Narnia."  Lewis Carroll was Lancelyn Green's big interest and he wrote a biography and edited Carroll's diaries.  He also did biographical work on our old friend HCA and on J. M. Barrie, who he admired greatly.  Lancelyn Green worked as Deputy Librarian of Merton College for five years (you just know I had to get that in there!), and later on served at the University of Liverpool, which was close to his ancestral home.


This ancestral home was Poulton Hall in Cheshire; the family has owned the house for over 900 years and is still in residence.  Today, it is open to the public a couple of days a year, and so if you get the chance you could visit the garden, which is now a memorial to Lancelyn Green's work.  Here is Poulton Hall's website, which has some nice pictures, especially of the memorial garden.


What Lancelyn Green really became known for were his retellings of tales and myths for children.  First came the tales of King Arthur and  Robin Hood, and I would recommend them over all the versions out there.  They are beautifully written, clear--without too much pseudo-medieval language that is hard to understand--and keep nicely to the traditional stories.  Of course I think we should all read lots of the versions available to us, but if you're going to pick one to read aloud to your kids, these are the ones to choose.


Later in the 1950s came retellings of Greek myths.  We have the Tale of Troy and some of the other Greek stories, and they are very good.   In the 60s Lancelyn Green branched out and produced books of Egyptian myths (again, one of the best available now), folktales from around the world, and Shakespeare.


Pauline Baynes, who famously illustrated the Narnia stories, illustrated The Tale of Troy, but unfortunately the modern paperbacks don't seem to include them.  I really think it's such a shame how they're always leaving wonderful illustrations out.  Grrrr.  Baynes also designed a bookplate especially for Lancelyn Green.  I sure wish I could find a picture of that bookplate, but it is eluding me.

Please do give Roger Lancelyn Green a try; he's very good.  Puffin has kept his mythology titles in print for years, in inexpensive editions, so they're quite easy to find.

*The list there does not include Dorothy Sayers, I don't know why not since at the end she's listed as a major Inkling author.

Oh wow! I just started reading Lancelyn Green's Robin Hood to pre-read for Medieval studies next year. I am enjoying it greatly. Thanks so much for the background information on him. I didn't know a thing about him. How very interesting!

Although I know plenty about Lewis & Tolkien, I know almost nothing about the other Inklings--I had no idea there were any other children's authors among them! I don't think I've ever read a single version of Robin Hood; perhaps I should give Green's version a try.

Faith, how fun! I'm glad you're enjoying it. Take a look at tomorrow's author for lots more medieval goodness.

Amanda, you have got to investigate the rest of the Inklings; they will repay you. Charles Williams wrote these really strange books. Owen Barfield did a nice history of English. And Dorothy Sayers is fantastic (she never attended the meetings, which were, sigh, all-male, but she counts anyway).

Another one of my favorite authors for homeschooling. I don't know if I have ever seen a RLG title w/ illustrations. I'm curious to look into it.