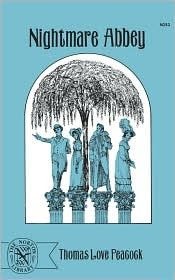 Thomas Love Peacock wrote short satirical novels at the beginning of the 19th century--about the same time as Jane Austen was writing. He would create eccentric characters--often caricatures of the literary lights of the day--set them down on a country estate, and make them talk. I started Nightmare Abbey several years ago and failed to get into it (I don't think I was in the right mood) so it's been sitting on my TBR shelf ever since. Now I've finished it and it was quite funny!

Nightmare Abbey, owned by the illustrious Glowry family, is an estate that stands between the sea and the Lincolnshire fens. The Glowrys are a gloomy family, and the young heir, Scythrop, is crossed in love. Some of the houseguests include Miss Marionetta, a coquette, Mr. Toobad, who loves to preach on the devil, Mr, Asterias on a quest to find a mermaid, and a mysterious lady hidden in a tower.

I couldn't help imagining the whole thing in Gorey illustrations. It was a really fun little satire on polite society with a semi-Gothic setting.

Here's an odd little fact: so far this year I have read 7 books set on the island of Great Britain. Five of them happen in Lincolnshire. Seems funny.
TBR challenge