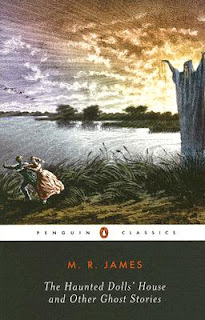 The Haunted Dolls' House and Other Stories, by M. R. James

I've been saving this second volume of James stories for a treat. Though they are not as consistently good as the earlier stories, I enjoyed them quite a bit and there are some really good ones here. James was very subtle about his ghosts and ghouls, which make them really good to read about--they're just suggested.

The title story, "The Haunted Dolls' House," sounded awfully familiar to me although I knew I'd never read it before. My 11-year-old daughter took one look at it and knew--the plot was lifted for a children's book she read last year called The Dollhouse Murders. It's really similar.

There's an extra treat at the end of the book--a little collection of 12 medieval ghost stories written in Latin and translated by James. The Latin is included, so you can try your hand at it too! And there are a couple of short essays on ghost stories.

I'm counting this as my horror selection for the Mixing It Up Challenge. At first I was wondering if this would really count as horror--they're not actually very scary stories, just nicely creepy--but then the hostess, Ellie, outright mentioned James as a classic horror author. So yay, I win! This is also my 6th title from my TBR pile.
Mixing it up TBR challenge