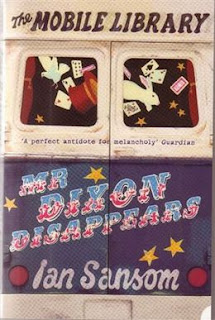 I don't know why I didn't read this Mobile Library mystery before, except that maybe I like to have one in reserve so I don't get to the end of them? It's been on my shelf for a while, patiently waiting to be read, even though I've already read one or two sequels.

The Mobile Library series is about Israel Armstrong, the vegetarian English Jewish librarian posted to the outer edges of Northern Ireland. "Hapless" is not a strong enough term to describe just how hapless Israel is--I think I've described him before as a librarian Arthur Dent. In this adventure, he's setting up a historical display in a department store when the store's owner goes missing. Israel takes a look around and the police show up and arrest him, so he has to prove his innocence.

These stories are always funny and relaxing--just what I needed!
TBR challenge