By Jean - January 06, 2012
November's Autumn's Classics Challenge involves saying something about whatever classic you're reading at the moment. This month's focus is on the author, so every so often I'll post some information about whoever I'm reading. At the moment, my problem is that her questions kind of assume that you're reading a novel, and all I've got is a trilogy of Greek plays and an early medieval treatise on philosophy. But no matter, we'll do our best.

Level 1 Who is the author? What do they look like? When were they born? Where did they live? What does their handwriting look like? What are some of the other novels they've written? What is an interesting and random fact about their life? 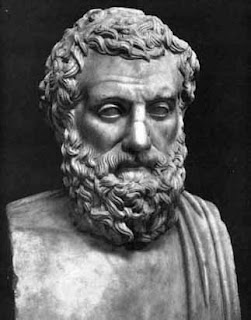 Aeschylus lived from ~525-455 BC. He is supposed to have been a native of Eleusis, which isn't too far from Athens, and seems to have lived there much of the time. No one knows what his handwriting looked like, and most of his many (70-90) plays have been lost, but besides the Oresteia, we have The Persians, Seven Against Thebes, The Suppliants, and the iffy Prometheus Bound (which may or may not be genuinely by Aeschylus).

Aeschylus fought at the Battle of Marathon and the Battle of Salamis. He is supposed to have begun his career as a playwright as a youth, when he fell asleep while working in a vineyard and had a vision of Dionysus, who ordered him to write tragedies. (The vineyard was of course the right place for such a vision, and the dramatic competitions the plays were for were in honor of Dionysus.) Much of the reason that we have lost so many of these Dionysian plays is that they were only intended to be performed once--there were new ones every year and it was only much later that the 'best of Greek drama' started to be put on in revivals. Kind of like the Eurovision competition!


Level 2
What do you think of their writing style? What do you like about it? or what would have made you more inclined to like it? Is there are particular quote that has stood out to you?

Aeschylus' style is very high-flown poetic rhetoric (as all Greek drama was in his day), and very heavy on compound epithets that are hard to translate. From what I hear his contemporaries didn't always get him either. To our ears it's very archaic and roundabout, taking forever to say any one thing. Here's a bit I liked from Agamemnon:
It is only deeds unholyThat increase, fruitful in offspringOf the same breed as its fathers.Where justice rules in the house, Blest of God is the issue.But ancient pride loves to put forth a fresh bloom of sin out of human evil...

Level 3
Why do you think they wrote this novel? How did their contemporaries view both the author and their novel?

The Oresteia was an entry in the annual competition at the Dionysian festival, and it is known to have won first place. Aeschylus' war record was considered to be more important than his literary talent, but he won first place quite often. He was also an innovator in the drama, so he must have been considered quite the rising star for a while. Apparently he was also accused of revealing some of the Eleusinian mysteries onstage, and he had to run away from an angry mob!
classics Greek classics