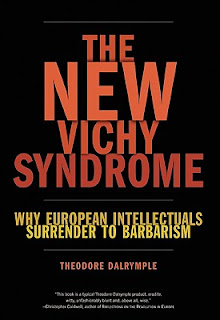 The New Vichy Syndrome: Why European Intellectuals Surrender to Barbarism, by Theodore Dalrymple

I like grumpy writers, and Theodore Dalrymple is by far my favorite grump (though he is not quite as annoyed as Peter Hitchens). The New Vichy Syndrome is Dalrymple's take on modern European, especially British, malaise. He says that although Western Europeans believe they have created societies that are very nearly ideal, and are more comfortable and secure than nearly anyone in the world has ever been, there is anxiety that Europe is no longer in the center of the world and is falling behind. After a century of war, Europeans have a "miserablist" view of their own history and culture and no longer believe that there is much meaning in life besides personal economic security and nice vacations.

It's interesting to note that Dalrymple does not point to overwhelming immigration as a problem, as so many writers do. His feeling is that the majority of immigrants acclimate (even if sometimes only to the worst, thuggish elements of British life) and are not interested in religious fanaticism, and that if there was a robust culture to receive them and insist on the rule of law and equal treatment of women, things would be fine. Since no one does insist on these things, there's a problem.

Dalrymple always gives me plenty to think about.
52 books