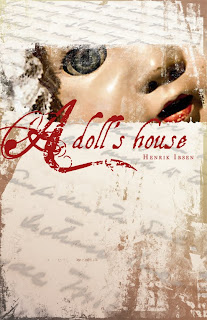 A Doll's House, by Henrik Ibsen

I'm a bit embarrassed that I've never read A Doll's House before, since it's so famous and all. Anyway, thanks to the Feminist Classics Challenge, I can now say that I've read and enjoyed it. A rundown (full of spoilers!) for those who haven't read it:

Nora is a middle-class housewife who has always cheerfully submitted first to her father's and then her husband's authority, as a good Victorian woman should. Her husband, Torvald, treats her like an indulged child, always calling her his little songbird and squirrel. Of course, he would never dream of treating her like an adult or an equal. Nora admits to her friend, however, that several years ago she saved her husband's life by borrowing money to finance a year in Italy for the sake of his health, for which she forged her dying father's signature. She is proud of her secret efforts on his behalf and has worked to repay the money, but fails to understand that her good motives do not mitigate the illegality of what she has done (as a protected wife, she knows nothing of law).

When her creditor threatens to expose her to her husband, Nora believes that Torvald will shield her and take the blame himself, and she plans to commit suicide in order to prevent him from ruin. She is shocked when Torvald does no such thing: "Nora, I'd gladly work night and day for you, and endure poverty and sorrow for your sake. But no man would sacrifice his honour for the one he loves." She replies, simply, "Thousands of women have."
Nora then realizes that she is not a woman at all; she has always played along with the men in her life and acted more like a doll than a human being. She decides that she cannot live with a husband she didn't choose and no longer loves--who is a stranger to her--and that she must go out into the world to gain experience and find out who she is. I can understand this, but I can't go along with the corollary, which is that Nora is leaving her three children as well: "Goodbye, Torvald. I won't see my children--I'm sure they're in better hands than mine. As I am now, I'm no good to them."

I suppose it's partly that the children are not major characters in the play, which is really about the relationship between Nora and Torvald, but Ibsen easily dismisses the children as if they are of no importance, and this bothers me quite a lot. Nora's comment that she is of no good to her children is a simple lie, not the clear-eyed assessment of her own incompetence that Ibsen seems to want it to be. Her children don't care that she has never learned to be an adult, and would probably prefer that she work on it without leaving them. Had Ibsen never seen the effects of parental abandonment, or was he just trying to keep the children out of the issue?
I would suggest to Nora that if one wants to become a responsible adult, one important step is to stick by one's children. It's not even as though it will be difficult for her to find time away from them to pursue her interests; they have a full-time nurse. Indeed, one way for Nora to grow up might be for her to spend some time caring for her own children, since she does not seem ever to have done so before.

This play is mainly interesting to me as a piece of its time. Audiences were shocked at what they saw as an attack on marriage and family (which it really isn't meant to be, more of a plea for equality in marriage). People were experimenting with ideas about marriage and equality that hadn't yet been tested. In the 20th century we went through some decades of women leaving their families in order to find themselves, so now, on the other side of Ibsen's story becoming a reality for many people, we see much more of the downside to the idea. Nora's departure no longer seems so much like the radical declaration of personhood it was meant to be.


Ibsen was a Victorian gentleman, so I'm counting this for my Victorian challenge too.
Feminist Victorian