Week 11: When the Luck of the Irish Ran Out 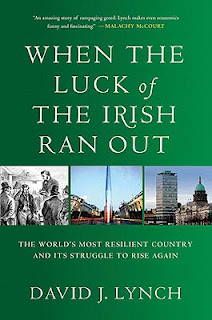 When the Luck of the Irish Ran Out, by David Lynch

This is a short history of the last 30 years or so of Irish economic (and political, and cultural) history. It gives a nice background of the difficulties Ireland has faced for so many years and then goes into detail about the Celtic Tiger period of the mid-90's to 2008 and the economic meltdown that hit Ireland much harder than it hit the United States.

Even in the early 90's, Ireland lacked infrastructure and jobs. The tech boom of the last 20 years brought the Irish into the global market, but as property prices spiraled, a massive housing bubble developed that makes Las Vegas look reasonable. I was really interested to read the details of how all this happened and the extensive cultural changes that Ireland has experienced in the last few decades.
52 books read around the world