Week 12: Marriage and Caste in America 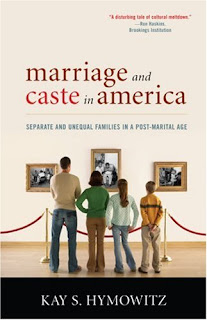 Marriage and Caste in America: Separate and Unequal in a Post-Marital Age, by Kay Hymowitz

This book has been on my TBR list for a long time, and I finally got it through ILL. It's actually a pretty quick read, not long at all, but full of issues to think about. Hymowitz takes on some very touchy subjects about marriage and poverty, with some racial issues thrown in.

Her thesis is based on the last 40 years or so of social history; ever since Americans decided that marriage is optional and that raising children and marriage are easily separated, children brought up without both parents in a stable marriage have suffered (and so have the parents). Hymowitz describes what she calls The Mission--the particularly American project of republican marriage, involving a couple who have freely chosen each other setting up an independent household and raising children to be informed and self-reliant citizens. Children destined to be active, independent participants in a republic need a large investment of time and effort from both parents, and a marriage has, until recently, been considered to be the way to get that job done.

The author describes two populations in America. There is the middle- and upper-class, made up largely of fairly educated parents who marry before having children and then (mostly) stay married. These people--especially the women--say that having kids outside of marriage is fine, but by and large they don't actually do it, because they have a blueprint for life instilled in them that goes education -> job -> marriage -> children. This is a life plan that, generally, leads to stability, a measure of prosperity, and most importantly a good outcome for the children. It's a plan that results in a self-perpetuating generational cycle of success and prosperity.

The other population is poor and trapped in a self-perpetuating generational cycle of poverty and dependence. Marriage has virtually disappeared as a social force and the resulting mix of single mothers, unreliable fathers, low education and welfare dependence means that people drift through life without a blueprint and find it extremely difficult to climb out of poverty. Children suffer and then grow up with good intentions but little idea of how to reach goals like being a good father, getting a college education, or forming a stable marriage. All those things have to be learned; they're not natural or easy behaviors. Nothing is more natural (says Hymowitz) than having a baby at 16; but our complex society isn't natural and it requires a lot of very particular behaviors and education.

Hymowitz concludes that the 40-year American experiment of separating marriage and childrearing is a failure, and provides a lot of evidence to back it up. I found it to be a very informative and interesting book. I'm sure I haven't covered the author's arguments very well--I haven't mentioned racial issues or Generation X's reaction to the popularity of divorce in the 70's and 80's--so if you're interested, you can read a lecture about the book here, or an essay here.
52 books