Understanding the Book of Mormon 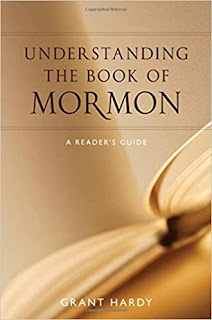 Understanding the Book of Mormon: A Reader's Guide, by Grant Hardy

I've read this book very slowly this year; it's fascinating, but it's also fairly heavy-duty.  Grant Hardy's complaint is that, in academia/the world outside the Church of Jesus Christ of Latter-day Saints, everybody spends so much time arguing about the origins of the Book of Mormon that they never examine the contents.  He proposes a different approach that doesn't need everybody to agree about whether the book is fiction or history: why not examine the narrative as we would a literary work?  The Book of Mormon has several different narrators, and we can examine their methods and motivations in the same way whether they were real or not.

...if the Book of Mormon does not qualify as a literary masterpiece, it is nevertheless a complex and coherent work of literature, and its narratological strategies are of more than passing interest.  Professors in English departments are probably not used to thinking of the Book of Mormon as a puzzle along the lines of Vladimir Nabokov's Pale Fire, but both works display a similar intricacy; indeed, to confuse Mormon and Joseph Smith would be a category mistake of the same order as failing to distinguish Charles Kinbote, the editor of Pale Fire, from Nabokov himself.

The result is quite a lot of absorbing analysis that illuminates stylistic and editing choices, literary parallels and deliberate quotations, all sorts of stuff that the average reader (like me) would not notice until it's pointed out.  Naturally, most of the people reading it are still going to be LDS and it's probably only of outside interest to people studying or working in the Mormon Studies departments being established in just a few universities.  But Oxford UP seems to have found it worthwhile, so that's nice for me.