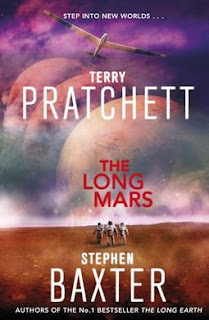 The Long Mars, by Terry Pratchett and Stephen Baxter

Happy New Year!  I've been having fun reading some old-school SF, as is tradition in January, but I also finally got The Long Mars.  I put it on hold months ago at the library -- it lived at another branch -- and it spent months in limbo, wandering around the system somehow until it landed where it was supposed to be, in my hands.  So I was happy!  And now I need to put a hold on the next book, The Long Utopia.  That shouldn't take so long to show up.

The Long War ended with the volcano at Yellowstone exploding on the Datum Earth, with global consequences (think Krakatoa, but more so).  Nations still exist, but the Long Earth is filling up with people who never intended to move there.  After that, we have three plot lines that work out practically separately:

Our original protagonist, Joshua Valiente, is asked to investigate the possibility that the Long Earth has sparked new developments in the human genome, and if so, what the deal is.

Sally Linsay's dad (the guy who unleashed stepping on the world in the first place) shows up and recruits her to explore Mars, leaving from the makeshift spaceport on an Earth next to a gap world.  Does a Long Mars exist too?  If so, are its layers in sync with Earth's, or do you get a whole different set of worlds?  And could life have developed on some of these versions of Mars?

Maggie Kauffman, US Navy Commander, is put in charge of the longest exploratory trip yet, with the goal of getting to Earth West 250,000,000.  And she's not told everything about her own mission.

On the whole, the novel is a great read, even though our characters' arcs are so disparate that they hardly ever meet each other.  The Mars exploration is fascinating, and so is Maggie's trip across millions of possible Earths.  I was a little disappointed that Joshua, who is having a hard time with his wife, simply never goes near his family in the whole book.  I don't want a whole lot of marital drama in my SF novel, but come on, he's got a family.

There were several nods to SF that has come before.  I wouldn't mention it, except that I was completely tickled by a spaceport geek guy wearing a faded t-shirt that says "Smoke me a kipper."  Now that is a good one.

I'm looking forward to the next two!  This is a great series and I think my husband and daughter would both enjoy it.
SF/fantasy