By Jean - January 15, 2018
My mom and I went to San Francisco, and we even drove there.  Which is insane.  I dislike going to SF, and I even more dislike driving there -- I can get very whiny about it.  I am an East Bay kind of girl.  But this worked out okay.  For one thing, it was on a Sunday, and also our destination was pretty close to the bridge and freeway, but south of it so that it was easy to park.  I did not believe the website's claim about "ample street parking" but it turned out to be true.

We actually arrived somewhat early, so we explored the neighborhood a bit.  We found an old, but apparently thriving, brewery. 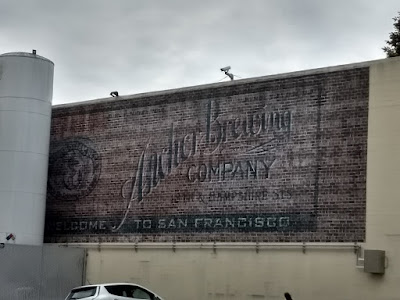 We found a very interesting church!  I mean, it's like a mission style Orthodox church, two styles I never expected to see together, but in fact it's Episcopalian.  We were taking pictures of the outside and this guy invited us in, where a service was going on. 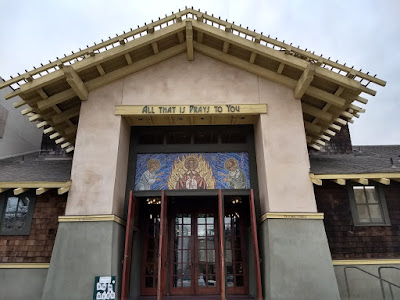 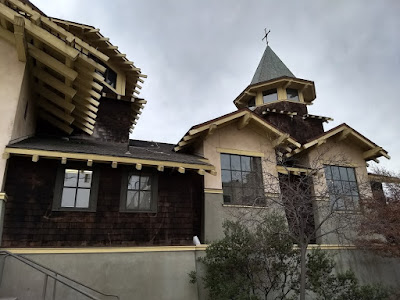 You enter into a large clear area with an altar in the middle, and the dome is painted with a stunning mural of Christ leading people in a dance.  They chose ninety people to be portrayed as saints, from St. Francis (with a wolf) to Dante and Emily Dickinson and all sorts of people. 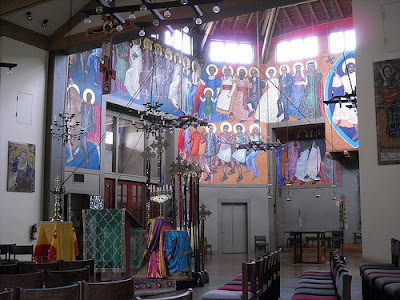 The people were very welcoming and clearly anxious for us to feel comfortable.  We just stayed and watched for a little while, since we had to go get lunch before our class.  Anyway, if you're ever in the neighborhood, St. Gregory of Nyssa Episcopal Church is well worth a visit.

After a quick lunch, we went in to the SF Center for the Book.  It is obviously a great place to do stuff in, and also fairly intimidatingly artistic.  There are all these presses in the main room, along with a side area for exhibits.  Other rooms are also stuffed with various giant metal presses and bookbinder tools. 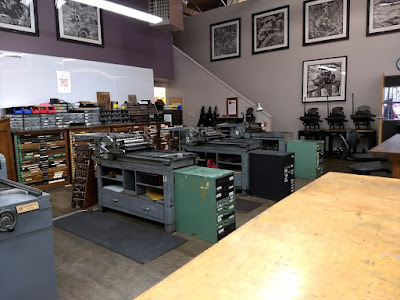 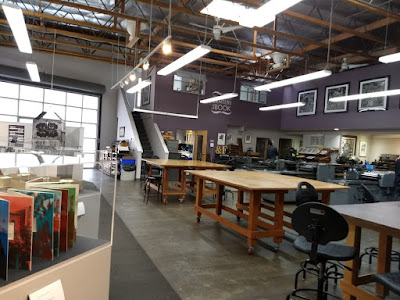 Our class was in a smaller room.  There were five students and one teacher, and four of us were librarians.  We made four kinds of sewn paper books.  The first two are quite easy but look impressively artsy -- there's a do-si-do book where the signatures face opposite ways, and one that puts a cool tab between the two signatures but only has to be sewn once.  Then we learned to do some more complex spine stitching with a "dots and dashes" arrangement (the blue one below), and a final book had several signatures to sew and a separate book jacket.  My photo below, taken at the very last second during clean-up, does not really give a good idea at all, so you could head over to the class page for some better examples.  Ours were very plain, since there was no time for embellishment.  As it was we went nearly half an hour over. 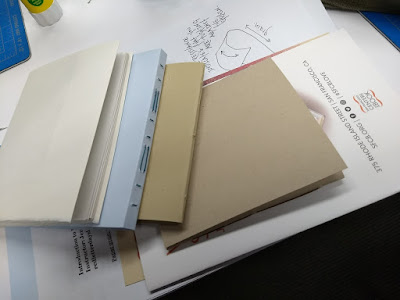 The whole thing was very fun and I would love to do more of the basic book classes.  I don't know if I will; getting to SF for a full day class is quite a tricky prospect and all the driving is kind of exhausting.  (I'm not a good long-distance driver; I get sleepy and I need to stretch my legs often.)  But their list of classes is hugely tempting.  I'm not likely to really learn how to do leather binding and tooling, but surely some simple Coptic stitching and hard covers would be fun?