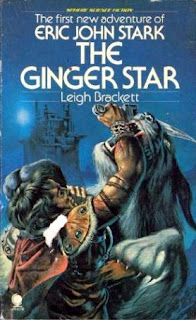 The Ginger Star, by Leigh Brackett

For the past few Januaries, I've included some Leigh Brackett in my reading of vintage SF.  This year I have the Skaith trilogy, which features one of Brackett's most famous protagonists -- Eric John Stark, otherwise known as N'Chaka.  Raised on Mercury by aboriginal people, fostered by an Earth official, Stark is now the toughest mercenary around and he has innumerable adventures on strange worlds.  The Skaith novels come later in Brackett's writing career, and also seem to be the longest Stark stories, since the rest is mostly novellas, I think?  I'd have to know a lot more about Brackett than I do to be able to state definitively.

Stark travels to Skaith, a planet on the outer edge of Earth's administration, because his foster father Simon Ashton, now a high-ranking official, has been taken prisoner there.  Skaith is a newly-met planet; contact with it is only a decade or so old, and Ashton went to see if he could straighten out some problems.  Instead, the Lords Protector have taken him prisoner, and thus Stark has to go find him, alive or dead. 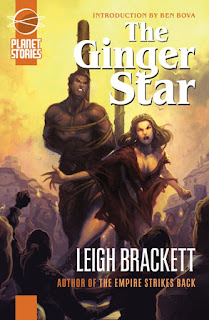 He gets a lot more than he bargained for, as he finds that the oppressed common people of Skaith are trying to leave the planet, and their governing body, the Lords Protector, won't let them.  Skaith is a very old planet; its star is getting more orange and cooling down (thus the 'ginger' star), and its shrinking arable lands cannot feed its people.  Once, it was a technologically advanced world, but now it's all fighting tribes.  Anyway, the people of the city Imran hail Stark as the prophesied Dark Man* who will destroy the Lords Protector.  The government reacts by trying to kill Stark, the prophetess, and most of the people of Imran.  Stark is pursued throughout a long journey north to the Citadel, the seat of the Lords and Ashton's prison, but the way is guarded by all sorts of interesting peoples and creatures, ending with the terrifying Northhounds.

I'm getting a great kick out of these stories.  They are the height of pulpy space opera, and they're pretty well-written, too!  Stay tuned for more Stark adventuring.