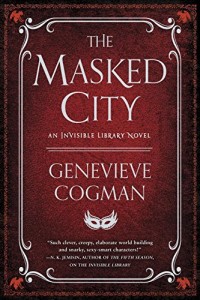 The Masked City, by Genevieve Cogman

I got the Invisible Library sequel!  This second volume did not disappoint, and I'm looking forward to #3 and finding out more about the mysterious Library, which has clearly got more agenda than Irene, a junior Librarian, can know about.

Irene and Kai have been settled into their station on an alternate world--the one from the first book--for some months now.  They're good friends with the master detective Vale and are doing pretty well, but then Kai disappears, abducted by an unknown agent (who is not the fae Silver).  Since Kai is in fact a dragon, this is both incredible and extremely dangerous, since the dragons consider it to be an act of war, and will have no compunction about destroying entire worlds and uncounted human lives in exacting their revenge.

Irene has a tricky job: find Kai and get him back before he's killed or the dragons go to war.  It's extremely dangerous, and a political minefield, and the Library won't help much.  Vale can't possibly be of much assistance (can he?).  And it's all happening in a world much further down the chaos spectrum, in an alternate Venice where of course, it's always Carnival.

I had a lot of fun and I'm really loving this series.  Considering that I don't read much YA any more and rarely get past a first volume, I think that's pretty good.
SF/fantasy YA lit