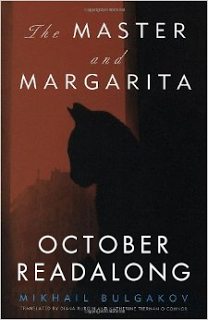 Last week everybody was pretty confused, and I'm guessing that this week's reading hasn't helped much!  With a new character or so in every chapter, a constant stream of chaotic events, and the usual trouble with Russian names, it's not easy to follow.

The first section we read struck me with its religious references and implicit criticism of writers who produce lies on demand.  This part has a whole lot about the secret police and 'disappearances.'  Just like in Soviet life at the time, the secret police are never mentioned directly; when people disappear, the book sort of ignores it (so watch out for it!).  Anybody can disappear at any time, and nobody will question it.

Nikanor, chairman of the tenants' association* for Berlioz' apartment building, is flooded with desperate requests for the half-apartment.  (There's a severe housing shortage, which gives him a lot of power.)  When he goes up to take a look at the apartment, there is already an occupant--Koroviev (the tall, checkered fellow that Ivan chased), who tells Nikanor that he agreed yesterday to give the apartment to Woland for a week, at a lovely high price.  Nikanor can't remember this, but there's a letter in his case to prove it, and the thought of taking a really enormous bribe blinds him to all else.  He gets 5,000 rubles down for a week's rent and he'll be able to keep a lot of it.  But just as soon as he leaves, Koroviev calls up the police and reports that Nikanor has hundreds of American dollars hidden away.  The police find the money--400 rubles has inexplicably turned to 400 dollars--and Nikanor is taken away.

Remember Berlioz' roommate, Styopa Likhodeev, who got whisked 900 miles to Yalta on the Black Sea?  His bosses at work, Rimsky and Varenukha, are getting pretty angry with his absence.  Nobody knows who this Woland performer guy is, and they blame Styopa.  A special telegram arrives from the Yalta police--they've got this madman in a nightshirt named Likhodeev who claims to work for this theater and what about it?  Rimsky and Varenukha are stunned; it must be a joke.  It isn't physically possible for Likhodeev to be in Yalta, even if he took a plane.  A flurry of telegram exchanges doesn't really help, and they decide to appeal to the police on their end to try to sort things out.  Varenukha takes them, but he's waylaid by Woland's cat and dragged to the apartment, where a redheaded vampire girl kisses him as he blacks out.

Ivan Homeless has been trying to write a statement about his experiences, but it's going badly.  He keeps getting on to Pilate and getting confused, and it just gets more unhinged with every effort.  He gets upset enough for the doctor to give him an injection, after which Ivan lies down and has a sort of disassociative experience, splitting in two and having an argument with himself over what to do.  And then he sees a man on his balcony!

But now it's time for the performance.  The hall is packed, and the MC, Bengalsky, introduces Woland and his assistant Fagott (who is Koroviev).  Woland starts a bit slow and Bengalsky keeps interrupting, so Woland first makes 10-ruble notes snow from the ceiling and then has the cat (Behemoth) rip Bengalsky's head right off.  It makes quite a mess, but Bengalsky apologizes and so they put him back together again.  Then they open a ladies' shop--a red-headed girl appears and gives all the ladies in the audience new dresses, shoes, and handbags.  It's a frenzy of fancy dressing which ends suddenly, and Woland exposes an eminent guest's indiscretions.  The audience goes kind of nuts, the police arrive, and Woland and company disappear.

Now Ivan meets his visitor.  It's a fellow inmate at the mental clinic; he's been there for a while and took some keys, so he can go around and meet other people.  Ivan tells him the whole story, and the stranger explains to Ivan that he has in fact met Satan.  This is the master, who has no other name.  He tells his story--he's a writer who wrote a great novel, all about Pontius Pilate, and when he met Margarita (who was already married), they fell deeply in love.  (Incidentally, it's totally unclear whether the master was married; he may have forgotten his wife.)  Margarita would visit every day as the master wrote, and she planned to break with her husband and live with him.  But when the master took his great manuscript to the publisher, he fell under suspicion and became the victim of a press campaign against him.  He is arrested, and after several months ended up in the clinic, where he plans to stay forever.

After the performance, Rimsky is alarmed by the police arrival and hears a commotion outside--ladies are running around in only their underwear.  The fancy dresses have disappeared, humiliating the women who wanted something for nothing.  Rimsky fears he'll be blamed.  It's late and he's alone in the building now, but Varenukha arrives and tells a long, complicated story claiming that he had found Likhodeev at a bar called Yalta, drunk out of his mind and sending crazy telegrams.  Rimsky would love to believe this, but realizes that it's all lies...and then sees that Varenukha has no shadow.  He has become a vampire, like the red-headed girl who is coming in through the window, and they both attack Rimsky.  He's going to die for sure, but just then a rooster crows; dawn is coming, and the vampires fly out the window and away.  Rimsky grabs his money and runs for the express train to Leningrad.

Nikanor is interrogated, but he's so incoherent that he winds up at the mental clinic, where he has a nightmare about confessing to hiding currency, and Pushkin.  The previously-beheaded Bengalsky is there too, piteously asking for his head.

By now the theater staff is pretty depleted, and the lowly bookkeeper Vassily is left in charge.  Since Woland has disappeared, he has to cancel the evening's show--the massive crowd that has collected in hopes of collecting free money is pretty disappointed.  The police are everywhere (their dog freaks out at the scent of vampire), Mrs. Rimsky shows up in hysterics, and Woland's posters and contract have mysteriously disappeared.  Vassily's job is to take the money from ticket sales to the bank, so he gets a cab, but the cabdriver is reluctant to take paper money, because every cabbie in town is finding that the magic ten-ruble bills turn into paper trash.  At the bank, the secretary is in hysterics because the boss (the eminent guest from last night) is now an empty suit doing meaningless paperwork.  Behemoth has paid them a visit.  Vassily goes to another branch of the bank, only to find the entire staff unable to stop singing folksongs--Koroviev has been there.  And when Vassily finally opens his briefcase of 21,000 rubles...it's stacks of forbidden foreign currency.


*Think of him as the superintendent of the building.  It's easier!


I find it very helpful to do these summaries of the action; I hope they're not too dull for readers!

The internet abounds with images of Woland's retinue, and it can help to have some visuals.  Here are a couple of good ones.