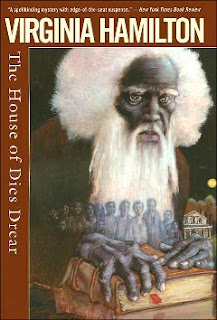 The House of Dies Drear, by Virginia Hamilton
The Mystery of Drear House

When I was about 10, I checked The House of Dies Drear out of the library and read it, but I did not understand a whole lot of it.  I remember it was kind of spooky and massively confusing.  When Leila (formerly of Bookshelves of Doom) mentioned it at her new blog, The Backlist, a couple of weeks ago, I went back and read it again, along with the sequel.  It makes a lot more sense now!

Thomas' family is moving from the mountains of North Carolina to a small college town in Ohio, where Mr. Small will teach history.  He is delighted to find an old mansion on the edge of town that belonged to an eccentric and wealthy man who was a major force in the Underground Railroad.  The house is full of secret cupboards and cave tunnels under the house, and there are rumors of ghosts.  Thomas is both nervous and thrilled with the house, and determined to figure out all the mysteries.  Pluto, the caretaker, has a long feud with the treasure-seeking Darrow family, and things get scary. 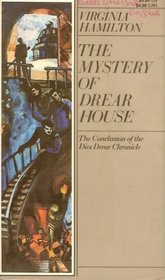 In the sequel, all the mysteries are finally revealed, but I didn't think it was as strong a story as the first one.  It's still pretty good, though.

The language of the books is really very evocative and kind of poetic.  I don't think anyone would write it quite that way now, which is a bit sad.  Much of the dialogue is designed to evoke a slightly old-fashioned, African-American style of talking--it's never dialecty, that's not what I mean--it's a particular style.  There is a lot of concern for remembering black heritage, and the strength and comfort it gives, particularly within the church.  Thomas' father talks quite a bit about whether having separate churches is a good thing or not; Thomas is skeptical, while his father sees it as positive.

I do wish that Thomas' mother was a stronger character.  She just doesn't come into the story as much--even in the sequel, when the great-grandmother becomes a large part of the action, the mother is an interesting person who doesn't appear much.  Thomas is mostly concerned with his father and with other men as he tries to figure out manhood and growing up.

It's easy for me to see now why I couldn't make sense of the story at 9 or 10.  I was a California kid.  I didn't know a thing about the Civil War, or the Underground Railroad, much less that there are black churches and white churches (though I was sick to death of missions).  I was pretty fuzzy on the part where Dies Drear is supposed to be the name of an actual person, because who is named that?  I have to say, it seems like a pretty unlikely sort of name, even for the 19th century.  Reading it as an adult was really nice, because I could see what Hamilton was doing.

The House of Dies Drear has held up over time and is still a really good book.  Get it for your kid (or yourself!) if you can, but be prepared to explain a lot.  Because of that, I wouldn't give it to a kid under 12; there's just so much that can be confusing if you don't know the history, or that Dies Drear is supposed to have been a person.


I'd also like to know why practically every fictional kid in the 70s got to live in an old, mysterious mansion on the edge of town.  It doesn't seem quite fair!  I was thinking that I've never known anybody who got to live in a place like that, but then I realized that I do--my friend had her family in a large country farmhouse from the 19th century for a few years in the 2000s.  It was known as the Big House.  It was both fabulous and difficult to live in; lots of huge, wonderful rooms, but dust got in everywhere, it was impossible to heat or cool, and the stairs were just plain terrifying.  I saw it just before they moved in, and the bedrooms had really wild 1970 wallpaper.  That was about the last time anybody had done anything to the place, but they'd put in a 1970 dream kitchen, with stereo and a barometer in the walls (broken), a built-in microwave (broken) and trash compactor (also broken) and two ovens, all kinds of amazing stuff.  There was even a butler's pantry with a sink and a meat locker (scary if you have small children, thus permanently open and unused).  Since the upstairs was just large bedrooms for farm hands, there was nowhere for a bathroom except the hall--so the hall had been turned into a bathroom and you could only get to one bedroom through it.  I loved hanging out there, but then, I didn't have to clean it or take showers in a hall.
American literature children's literature YA lit