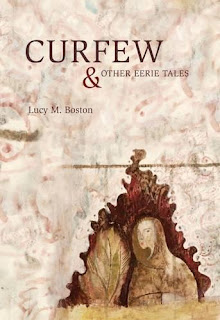 Curfew and Other Eerie Tales, by L. M. Boston

I bought this book on my UK trip and have been saving it for October!  L. M. Boston wrote several creepy stories in the early 1930s, but only three were ever published (each in different anthologies).  The stories were found among her papers and published together in this collection, along with a short play suitable for young amateurs to put on.

The stories are really pretty creepy!  I enjoyed them a lot.  They are similar in style to M. R. James' stories, in that they have a kind of domestically-flavored horror, and frequently feature children, but Boston is less tidy in her endings; they are left open and mysterious, with no solid conclusion.

The play, "The Horned Man," is set at a country manor house in the reign of King James I, who has sent witchfinders to roust out any witches there might be around.  The two older daughters of the house, bored and mischievous, try to curry favor with the official in hopes of being whisked off to court, but he has motives of his own for his work.

There is also an introduction by Robert Lloyd Parry, who sometimes gives performances at the Manor, reading M. R. James stories in the dark.  Oh, how I wish I could go to one of those!

Dialogue from the story "Pollution:"


"They behave, with their smoke and slag heaps, as if they had killed the very forces of nature. But nature has a dual personality.  They may think its beauty not worth bothering about, but it may still have surprises for them more hideous than they expect."

The book itself is lovely.  Published by Swan River Press, it is a hardback book with a 19th-century painting of the Manor on the cover.  Then the dust jacket features a painting by Lucy Boston's close friend Elizabeth Vellacott; a few of her paintings are on show at the Manor.