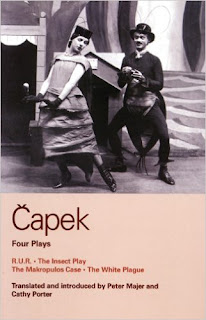 I read R. U. R. a while back, and I wanted to read the other three plays in the book, but I didn't get around to it for quite a while.  Silly, because they are pretty neat.

The Insect Play: an entomologist observes several different kinds of insects, who illustrate types of humanity.  Butterflies are flirtatious Bright Young Things with just one thing on their minds; dung-beetles only think about gathering wealth, while crickets are all about family, and ants have a fascist war-machine going.

The Makropulos Case: a lovely singer captivates everyone she meets.  Men all want her; women all want to be her, but she is incredibly cold and unfeeling.  It's about mortality and the necessity of death.

The White Plague: a new illness, which looks like leprosy but only attacks those over fifty, is becoming an epidemic.  No-one can escape, and it's always fatal.  A young slum-clinic doctor develops a cure, but he will only give it to the poor; the powerful may only have it if they cease a run-up to a devastating war.  It's a savage criticism of the fascist regimes Čapek saw destroying Europe.

Interesting plays all.  Very worth reading.  I'll be looking to read some of Čapek's other works sometime.
drama Eastern European literature Translation Challenge