The Tyranny of Silence 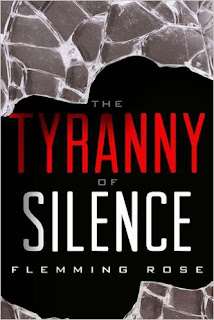 The Tyranny of Silence: How One Cartoon Ignited a Global Debate on the Future of Free Speech, by Flemming Rose

Remember just about ten years ago, there was a big kerfuffle in Europe over some editorial cartoons?   Flemming Rose, a new editor at the Danish newspaper Jyllands-Posten, was hearing more and more that people were self-censoring on the subject of Islam.  An illustrator asked to work on a children's biography of Muhammad said that he would do the work, as long as his name did not appear on the book.  Well, Rose thought that was maybe not so good and everybody should start talking, so he asked a whole lot of cartoonists to submit portraits of Muhammad.  Twelve ran, and pretty soon there was a mess.  Death threats, murder attempts, incitements to riot in Islamic countries, and a lot of yelling ensued.  Rose (who had actually spent most of his career in Russia) was both taken aback by the reaction, and upset to find that an awful lot of people thought that censorship of one kind or another would have been better than running the cartoons.

Here, Rose talks in some detail about the whole incident, and then moves into a wider context, giving his arguments against the idea that only "punching up" is acceptable (power dynamics are a lot more complex than that) or that minorities ought to be protected by legislation.  He gives his thoughts about European worries about free speech over the past 70 years or so.  He also talks about his time in Russia and the severe curtailment of free speech that has been habitual there.  Finally, he gives some specific incidents from Islamic countries showing that anti-blasphemy laws are mostly used to oppress, not to protect vulnerable minorities.

It's all quite fascinating and very worth reading; a valuable addition to the ongoing discussion of what free speech means and how far it can or should be taken.  I had so many pages tagged that my book bristled, and I'm just going to throw some quotations at you all at once:


Certain regimes, including Russia, China, some former Soviet republics, and numerous Islamic governments, agitate in the United Nations and other international forums for laws banning offensive speech.  Perversely, although such laws are often put forward in the name of minorities, in practice, they are used to silence critics and persecute minorities...(p 9)

...[in the US] after they won the right to demonstrate, the Nazis failed to gain much attention and the movement died soon afterward....the most effective means of combating Nazism was to defend the freedom of speech of the Nazis themselves...(p 61)

Agnes Callamard...pointed out that constraints imposed on free speech with the intention of safeguarding minorities against hatred more often than not resulted in the most controversial voices of the minority being either silenced or imprisoned.  "Experience shows that restrictions on freedom of expression rarely protect us from abuses, extremism, or racism...they are usually and effectively used to muzzle opposition and dissenting voices, silence minorities, and reinforce the dominant political, social, and moral discourse and ideology." (p 62)

...deliberate cultivation of the role of victim is part of a contemporary grievance culture that I feels is poisonous to integration and equality in a democratic society. (p 66)

When we focus on nondiscrimination and equality, and aim to empower the aggrieved, tolerance is no longer about the ability to tolerate things that we don't like; it becomes the ability to keep quiet and refrain from saying things that others may dislike.  That is the basic, and very flawed, premise underlying the much-touted phrase "Freedom of speech is not the same as freedom to offend." (p 115)

"In a democracy no one, however powerful or impotent, can have a right not to be insulted or offended.  That principle is of particular importance in a country that strives for racial or ethnic fairness." [Law professor Ronald Dworkin, p 117]

As societies become increasingly multicultural, multiethnic, and multireligious, if we accept the idea that people have a right not to be offended, we will end up with a tyranny of silence, for almost any speech may be deemed offensive.  (p 204)

...when words run out, violence begins.  If we forbid offensive speech, individuals will resort to direct action. (p 207)

So--read this book!  Or another book about free speech!  And be sure to grab yourself a banned or challenged book for next week! 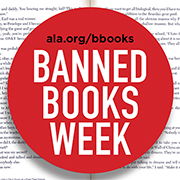