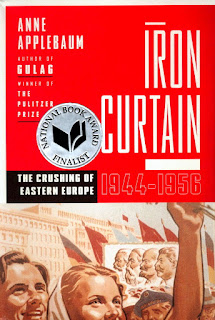 In my ongoing quest to learn everything about the awful things done to Eastern Europe in the 20th century, I've read the third book in a non-series that I think makes an excellent trilogy anyway.  First we have Bloodlands, by Timothy Snyder, and then Savage Continent, by Keith Lowe, and now I've got Iron Curtain under my belt as well.  All three of these draw on information that has only recently become available to the West.

Appelbaum decided to write about Eastern Europe as a group of countries because she felt that although the various countries had differences in how they became part of the Communist bloc, they also had a lot in common, and looking at them together could reveal patterns and insights that might go unnoticed when considering each country individually.  So she divides her book into themes, such as violence, youth groups, socialist realism in art, religion, media, and so on.

It is remarkable to see how the USSR manipulated and forced each country into communism.  Applebaum describes how they pretended to welcome diverse political groups into the government, while making sure that Russian-trained communists were always in the most influential spots--especially in the police.  Then they would quickly force others out.  At first, they were happy to hold elections, because they were truly convinced that the people would choose communism.  When that didn't happen, they simply falsified the results, or forced their own people into power. 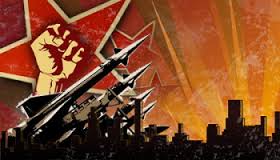 Pretty soon, the communists held total power, and started getting rid of anything that wasn't part of the communist state.  They truly believed in Mussolini's maxim of  "all within the state, nothing outside the state, nothing against the state."  Scout troops, women's organizations, men's clubs--no group not sponsored by the Party was allowed, and so they either were absorbed or destroyed.  (No book clubs or sewing circles!)  The churches were persecuted, of course.

It soon becomes apparent that a communist state "for the workers" is not for the workers at all--or for anybody except those in power.  If workers in factories were not satisfied with their conditions or the high quotas imposed on them, and they protested or even struck, they were treated as not just workers on strike, but as treasonous. 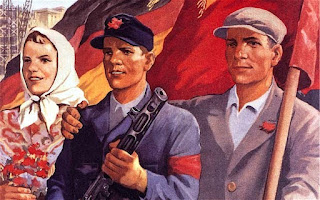 Just as in the USSR, Eastern Europeans were subjected to ever-increasing paranoia and the personality cult of Stalin.  Each country developed its own prison camp system, though they frequently sent prisoners to Russia as well.  The parts about shutting East Germany down were particularly interesting, since they were dealing with a divided Berlin and cutting a country in two.  This meant that the German borders were always more porous than others, although the DDR certainly tried hard to stop any exchanges.

There is just so much material here that it's hard for me to give a good summary.  But it's great historical information and, in my opinion, important for us to understand.  We seem to be forgetting so much--and just when we have access to incredible new knowledge.

Some quotations I found interesting:


Since Stalin had little faith in Polish communists in general, he might well have preferred a possible [Nazi] collaborator like Bierut to a true believer like Ulbricht.  Anyone can lose their faith in communism, but blackmail is forever. (p. 47)

To a Soviet officer, educated in Bolshevik schools and trained in the Red Army or the NKVD, an active participant in any political group other than the communist party was a suspicious figure by definition, and probably a saboteur or spy.  Politburo members in Moscow could speak in theory about the creation of "socialist democracies," but Soviet administrators on the ground were often unable to tolerate anything other than a totalitarian state.  They reacted with instinctive horror when newly liberated citizens began to exercise the freedom of speech, press, and association that the new regimes' rhetoric appeared to promise. (p.90)

The Polish secret police...rummaged through their files and identified twenty-five categories of "enemies."  These included anyone who had been in the Home Army, anyone who had been at all active in the pre-war social democratic movement or any other political party, and anyone who had served in the Polish armed forces abroad.  Many who had been released from prison in 1947 or had accepted amnesty after the war immediately fell under new suspicion too.  Eventually, this list grew to forty-three categories. (p.276)

I particularly appreciated Applebaum's conclusion, which offered up some great insights and was not just a re-summary of what had gone before.


...none of the regimes ever seemed to realize that they were unstable by definition.  They lurched from crisis to crisis, not because they were unable to fine-tune their policies but because the communist project itself was flawed. By trying to control every aspect of society, the regimes had turned every aspect of society into a potential form of protest.  The state had dictated high daily quotas for the workers--and so the East German workers' strike against high daily quotas mushroomed quickly into a protest against the state.  The state had dictated what artists could paint or writers could write--and so an artist or writer who painted or wrote something different became a political dissident too.  The state had dictated that no one could form independent organizations--and so anyone who founded one, however anodyne, became an opponent of the regime... (p.464-5)

Great book.  Read it!  This is one of my best of the year.

By seeking comprehensive control, the regimes had turned every aspect of society into a potential form of protest. - See more at: http://www.claremont.org/basicpage/iron-curtain-rust-or-rupture/#.VfnsD5eE7So
history