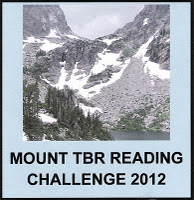 Bev at My Reader's Block says it's time for the quarterly check-in for the Mount TBR Challenge.  I'm pretty happy with my progress--two more books and I'll be done with the Mount Vancouver (25 titles) level.

Here's what I've got:

Bev says I have to answer a question or two.

Looking ahead to next year's challenge: Is there a level that you'd like to see added (maybe a 30 or 35 level or some other number in between our current mountain peaks)?

No, I think the levels are pretty good as they are. :)


Have any of the books you read surprised you--if so, in what way (not as good as anticipated? unexpected ending? Best thing you've read all year? Etc.)

I did not expect to love Madam Bovary as much as I did.  Nightmare Abbey was funnier than I expected, and the Keegan history on World War I was a tougher slog even though it was good.  And I thought The Story of an African Farm was a memoir when I started...

It's been a long time since I read Madame Bovary (college). I remember liking it, but couldn't really tell you why now. Congratulations on being so close to the top!