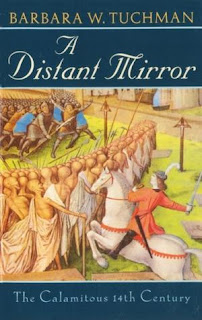 A Distant Mirror: the Calamitous 14th Century, by Barbara Tuchman

The 14th century was pretty bad, and Barbara Tuchman is here to tell you all about it.  Her central focus is on France, which was the cultural center of medieval Europe in many ways, and she picks Enguerrand Coucy VII as a organizing central figure to follow.  The Sire of Coucy was an important lord involved in nearly everything that went on, and there is plenty of documentation about him.  That said, I don't think that the majority of the book is directly about Coucy; there is lots of background information and other stuff going on.

Misery is piled upon misery in the 14th century; the Black Death, constant pointless warfare, brigandage that ruins towns, a papal schism, and a ruling class that requires ever more money and ostentation while impoverishing ordinary people and delivering nothing but bad government.  More than anything else, there is war--quite often war simply because the knights want to go have a war and win lots of glory and loot.  (Loot being more important than either glory or the supposed purpose of the war, knights would frequently leave without even trying to accomplish their objectives.  And the desire for glory led them to neglect tactics, common sense, and their own foot soldiers.)

Tuchman explains the decline of the Middle Ages and the chivalric ideals that were supposed to guide it; by the end, Europe's population has been cut nearly in half, people are impoverished, government is chaotic, and everyone is quite ready for a new outlook on life.  She is clear and insightful, but the book is not an easy read.  Some bits that struck me:

Ostentation and pageantry to raise the ruler’s image above his peers and excite the admiration and awe of the populace was traditionally the habit of princes. But now in the second half of the 14th century it went to extremes, as if to defy the increased uncertainty of life. Conspicuous consumption became a frenzied excess, a gilded shroud over the Black Death and lost battles, a desperate desire to show oneself fortunate in a time of advancing misfortune.

On hearing of Anjou’s death, a tailor of Orleans named Guillaume le Jupponnier, when “overcome with wine,” burst into a tirade in which can be heard the rarely recorded voice of his class. “What did he go there for, this Duke of Anjou, down there where he went? He has pillaged and robbed and carried off money to Italy in order to conquer another land. He is dead and damned, and the King St. Louis too, like the others. Filth, filth of a King and a King! We have no King but God. Do you think they got honestly what they have? They tax me and re-tax me and it hurts them that they can’t have everything we own. Why should they take from me what I earn with my needle? I would rather the King and all kings were dead than that my son should be hurt in his little finger.”

What knights lacked in the fading 14th century was innovation. Holding to traditional forms, they gave little thought or professional study to tactics. When everyone of noble estate was a fighter by function, professionalism was not greater but less.   Chivalry was not aware of its decadence, or if it was, clung ever more passionately to outward forms and brilliant rites to convince itself that the fiction was still the reality.Outside observers, however, had grown increasingly critical as the fiction grew increasingly implausible. It was now fifty years since the start of the war with England,and fifty years of damaging war could not fail to diminish the prestige of a warrior class that could neither win nor make peace but only pile further injury and misery upon the people.


It's an excellent work of history, and very well-written.

I'd been meaning to read this book for years, and tried a couple of times, but had a terrible time getting into it.  After a while I realized that part of my problem was that my copy was very old; it was yellowed, stiff, and cracking, and had once suffered from damp.  It's a book that is quite difficult enough to read if you have a beautiful copy.  My husband bought me a new paperback for an anniversary present, and I must say reading a nice pretty book with a flexible spine helped a lot. Thanks, honey!
Posted by Jean at 4:20 PM

I read this many years ago, and remember being gripped by her account of Medieval life, which was not nearly as romantic as I had previously thought!

I remember reading this book at the recommendation of my mom. I became completely immersed in Medieval life. Great book.