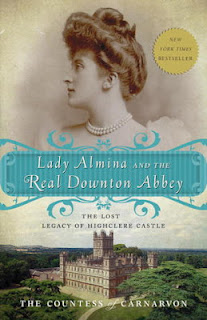 Lady Almina and the Real Downton Abbey: the Lost Legacy of Highclere Castle, by the Countess of Carnarvon

I've been seeing this history book all over the book blogs, and was happy to get a chance to read it.  This is the life story of Lady Almina, Countess of Carnarvon, and an exciting life it was.  The family, and the Carnarvon country seat of Highclere Castle, has been the inspiration for the hugely popular Downton Abbey TV series (which I have not yet seen the second season of, so no spoilers allowed!).  The current Countess took the opportunity to tell the real story of the Carnarvon family, which is much nicer and lacks backstabbing sisters or evil footmen.

Almina Wombwell started off as a very pretty debutante with a  dubious background.  She was the natural daughter of somebody (Alfred de Rothschild), which made her very wealthy indeed but an outsider in Victorian England. Even so, young lords needed rich heiresses to keep their estates going, and Almina snagged the Earl of Carnarvon--and luckily for her (unlike many other similar marriages), they were quite happy together.

Almina was good (if extravagant) at running a great house, and before World War I came along, Highclere was a model of its kind.  It all sounds much more pleasant than Downton Abbey, but I guess you can't build a soap opera on nice people.  The Earl was hugely interested in Egyptology and they traveled out to Egypt several times--yep, he was that Lord Carnarvon!--before the war, which of course changed everything.

Almina had realized that she was an excellent nurse, and she established a hospital for severely wounded officers.  At that time, the military had no infrastructure for treating the massive flood of ill and wounded soldiers, and wealthy women like Almina stepped into the breach to provide much-needed care.

After the war, it was back to Egyptology, and the last part of the book mainly covers the great discovery of King Tutankhamun's tomb and Lord Carnarvon's sad death.  There is a little bit after that, but the book is really focused on Almina's life as the Countess of Carnarvon.   It's written by the current Countess (and I don't understand why her title is the author information like that, but it is).

I hope that this history will be reissued under a different title in a few years; it's a delightful story in its own right, and doesn't need to be linked with Downton Abbey forever.  When the soap opera is over, the history will still be interesting and real.
World War I

Nicole said…
My friend picked this up at a recent book store run and told me she'd let me borrow it when she's finished. I can't wait - it sounds great.
September 10, 2012 at 9:18 AM

Jennifer said…
I absolutely agree with you about the need for the story to be allowed to stand on its own. Honestly, I thought the true story was much better than the show (although I love the show, too!).
September 10, 2012 at 1:03 PM

Anna and Serena said…
Thanks for participating in the WWI challenge...this sounds like a good one. We've linked to your review and a snippet will appear on Sept. 21 on the main blog page.
September 10, 2012 at 4:14 PM

It's Almost Time For 20 Books of Summer! (Plus Bonus Update) 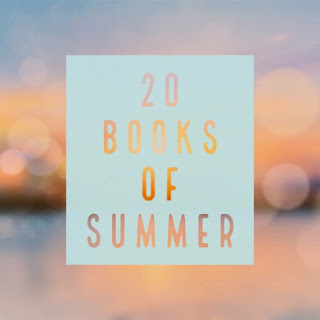 Despite the fact that time has slowed to a crawl under lockdown, I'm still capable of being surprised that June is in a couple of weeks and it's time for Cathy's 20 Books of Summer event.    As usual, it runs from the first of June through the first of September, and the hashtag this year (which I will forget to use) is #20booksofsummer20 .  My preference is to pick 20 books and put them in a pile -- Cathy has no serious rules.  This year, I have two summer readalongs of giant tomes, so those count in the list.  And I gave myself a couple of alternates, in case.  So here are my titles -- some fun, some classics, some challenge titles, all from my two TBR piles since new books aren't really a thing right now: The Golden Bough, by Sir James Frazer The Mysteries of Udolpho, by Mrs. Radcliffe (readalong #2) The View From the Cheap Seats, by Neil Gaiman The Spy and the Traitor, by Ben McIntyre Edward Lear biography, by Vivien Noakes Age of Anger, by Pankaj
Read more