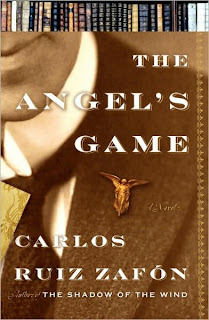 It's back to the world of tortured Barcelona and the Cemetery of Forgotten Books.  I like the Cemetery, but I'm not so keen on Barcelona.  This time, we follow David Martin, a young man with literary ambitions and lots of torment in the 1920s.  He is approached by a mysterious French publisher named Corelli, who draws him into a Faustian contract to write a book.  As David starts to realize that there is a web of old tragedy and secrecy around the house he lives in, he also begins to think that Corelli had a lot to do with that.

The element that made me enjoy the first book was the weird Gothic humor, and that was missing this time.  There is, of course, a beautiful and unobtainable girl, though this book was thankfully much lighter on the adolescent boy stuff than The Shadow of the Wind.  On the other hand, pretty much everyone dies violently, and once again, Barcelona appears to be about the worst place in the world to live unless you enjoy living in torment and destroying the lives of those you love.  Don't move to Barcelona, is my advice.

I am not really a fan of these books, but I will probably read the third one anyway.
Posted by Jean at 6:30 AM

Heh, and I was considering Barcelona as a winter holiday destination ;) On a more serious note, I've got The Shadow of the Wind on my tbr pile to read this year, but I'm a but bummed to hear that it's bit adolescent-y (which is exactly what I didn't like about The Prince of Mist). Violent death sounds perfect for R.I.P.

But it doesn't sound like you are very enthusiastic about this series :( I hope it'll redeem the first two?

I have very mixed feelings. :) There are elements I quite like and others I'm not so wild about.

I suppose the real-life Barcelona can't possibly be that bad, or everyone would be dead by now. If you ever do go, report back! ;)