The Book of Beasts 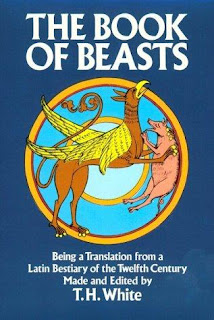 The Book of Beasts: a translation of a 12th-century Latin bestiary, translated by T. H. White

My 11-year-old daughter read most of this bestiary last summer in preparation for her year of medieval history. I've had it on my shelf for a long time, but had never gotten around to reading it. Now, thanks to the Medieval Literature challenge, I've finally done it!

This is a translation of a catalog of animals from all over the world--it's an animal encyclopedia and a serious scientific treatise. Bestiaries were very popular, and this particular one was probably written at Revesby Abbey in Lincolnshire, which at that time was a sparsely populated semi-wilderness (and remember that England had a long and devastating civil war around then). The book would have been dictated to several monks, each of whom produced a copy. Then the illustrator would do the pictures.

To modern eyes, the descriptions of animals are adorably credulous; the older the story, the more credible it is, so Aesop's word is taken as gospel. In this way, all sorts of odd factoids and legends were preserved, such as that monkeys are lively at the new moon but depressed at its full, that elephants have no knee joints and cannot get up if they fall, and that hyenas change sex at will.

These behaviors and traits are then turned into allegories that illustrate religious principles, which accords with the medieval view of the universe as a highly ordered creation that continuously points to God. For example if an elephant falls over, he calls out and summons a big elephant to help him. That elephant can't do the job, so 12 more come and try, but they also fail. Finally a little, insignificant elephant comes and raises up the helpless elephant. This is an illustration of the gospel, showing that the Law of Moses (big elephant) and the Old Testament prophets (12 elephants) could not help fallen man, but that Jesus, lowly though he appeared, came to save mankind.

As with modern animal encyclopedias, the pictures are an important part of the book. The artist, of course, had never seen most of the animals he drew, and any pictures he had seen were drawn by artists who had never seen them either. The result is that while horses and domestic birds are beautifully drawn, lions look an awful lot like dogs and elephants look like pigs with long noses, right down to the cloven hooves. Bats are interesting--and classified as very unusual birds)--and the camels don't have nearly enough hump.

I think we're inclined to dismiss all this as adorable medieval credulity, but luckily T. H. White wrote a wonderful appendix that makes the monks' world come alive for the modern reader. It's really helpful (and humbling!). So the appendix is very worth reading--don't skip it.
Posted by Jean at 6:00 PM