Volume 7, Brief Lives, is somewhat ironically named, since nearly everyone in it is, if not immortal, kind of close to it.  Delerium -- once Delight -- approaches her siblings, asking them to help her find their lost brother.  Destruction abdicated his post a few centuries ago, and asked to be left alone.  But Delerium misses her brother and is impervious to argument, so Dream agrees to travel with her.  They go on a road trip to track down some of the people who may know where Destruction is, but those people are showing a worrying tendency to turn up dead.  Morpheus ends up having to consult his son, Orpheus.... 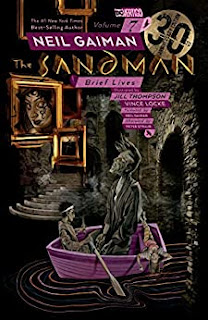 Volume 8, World's End, uses an old device: it collects many people into an inn to tell stories as they wait out a storm.  But this is no ordinary inn.  The people are from many different times, places, and worlds, and they have all run into a reality storm that tore them from their moorings and deposited them the inn at the end of the world.  Each must tell a story.  This is a really good one!

Volume 9, The Kindly Ones, is huge; it lasted for 13 issues and is a complex, heavy story involving many characters from previous stories.  Lyta (short for Hippolyta) has a little toddler son, Daniel.  She has always stayed close to him, hardly even going out, but she needs a job, and goes to an interview while a friend watches Daniel.  Lyta gets back and Daniel is gone, with the babysitter dead asleep on the floor.  Lyta, frantic, calls in the police, who are strangely unhelpful.  Convinced that Daniel is dead and that Morpheus killed him, she embarks on a mad journey to enlist the Furies (er, ladies; they don't like being called that) for her revenge.

This one is excellent, probably the crowning piece of the series, with several other plots braided in.  If I read it several times I might start to pick up on all the layers, but probably not. 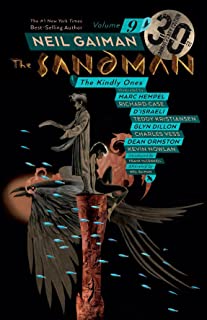