We spent Saturday morning sitting in traffic, because everyone in Germany was heading off to their summer vacations.  It took hours to get to Chiemsee, though I didn't notice too much because being in the bus usually sent me right to sleep, so I got a good nap. 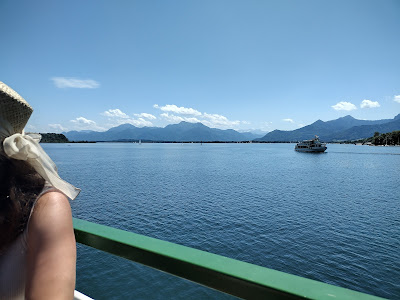 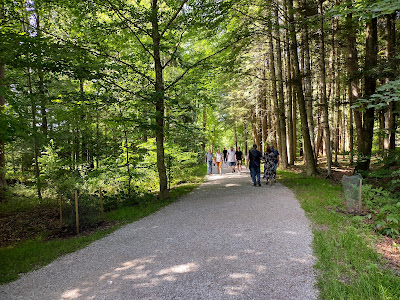 Chiemsee is a lovely lake and we took a ferry out to the island in the middle.  It was sunny and hot (for Germany; about 80, but the direct sun was baking!), and full of happy vacationers.  Once on the island, there are several trails and we took an absolutely beautiful walk to the palace of Herrenchiemsee.  This was Ludwig II's second and larger version of his own Versailles, and has a large formal garden in front with pools and statuary -- luckily, bordered with trees on the sides.  I like shade! 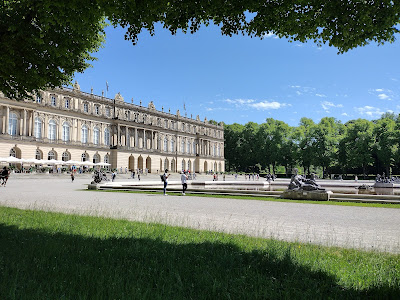 The palace is very large, but mostly unfinished; in fact it was planned to be larger but part never got built.  We entered into a large, imposing double staircase hall full of marble, or walls painted to look like marble, and statuary, and toured several large rooms, including two state bedrooms (one for show, in the style of Louis the Sun King, whose life is shown on the walls, and one only slightly less lavish  for living in) and a hall of mirrors with innumerable giant chandeliers.  Huge chandeliers were a feature, culminating in one made entirely of Meissen porcelain and never reproduced.  Like many of Ludwig's rococo furnishings, it is at once an amazing work of talent and art, and really kind of a monstrosity. 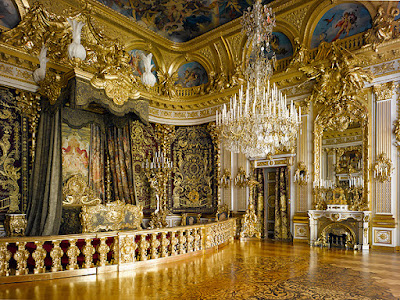 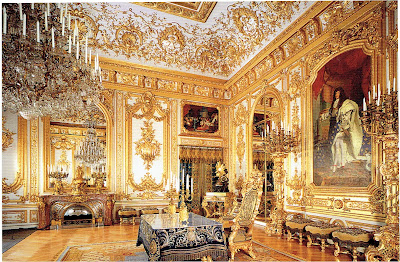 After that, however, we exited through a double staircase hall, the twin of the first one, except that it was all still brick and wood.  Most of the palace was never finished, and Ludwig only stayed in it a few times before his death.

We walked back to the island's dock, and ate lunch at a beer garden, but since we'd been stuck in traffic for so long, everything had had to be rearranged, and rearranged again, by our long-suffering tour manager Felix.  Lunch wound up being at 3:30, and probably most of us would have preferred ice cream for that meal.  Then back on the ferry and home on the bus, and dinner a bit too soon after lunch for anyone's liking!