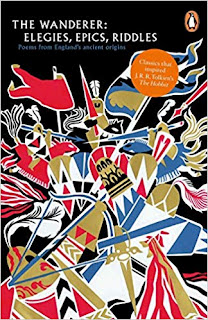 I sure wish I could read Anglo-Saxon.  Alas, I cannot, and if I ever get enough time to study it I'll probably be too old to learn it very easily.  (I probably already am; it was easy to learn the Russian alphabet at 19, but I cannot seem to learn the Greek alphabet now.  Maybe I just need to try harder.)  Anyway, we don't have a lot of Anglo-Saxon literature; you can fit it all into one good-sized book.  This is a collection of pieces, some from the Exeter Book, some from other sources, that I suppose is meant to serve as an introduction to Anglo-Saxon literature that isn't too difficult to enjoy.

Some of the pieces should be familiar to anyone who has taken a little bit of English literature: Caedmon's Hymn, the Dream of the Rood, a few short selections from Beowulf (why?).  But this collection is interesting because it features a lot of material that isn't as familiar.  I was happy to finally read The Battle of Maldon and some other pieces I'd heard of.

There is quite a bit of short poetry: a description of a ruined Roman city, the lament of an exiled wife, some heroic poems.  The Wanderer and the Seafarer are both poems about the life of a man in exile, who has lost his lord and his fellows in battle.  Loyalty to one's lord and the despair of the man who has lost his are very common themes.

Then there is a selection of riddles, the kind that describe an object in obscure terms.  I am terrible at these, but they're fun to read.

The one disappointment is that there is a very short selection from The Phoenix, a poem that describes the life of Christ allegorized as the life of a phoenix.  I would happily read this poem if I could find a modern translation, but so far I haven't been able to (I haven't exactly made it my quest or anything).  Every time I find a copy, it's just in the original Old English.  I find this puzzling.

This collection is a Penguin edition that has been around for fifty years or so.  Penguin re-issued it a few years ago in a fancy cover along with other "Legends from the Ancient North" with a sticker that says "Classics that inspired J. R. R. Tolkien's The Hobbit."  I appreciate their efforts to attract new readers of classics through marketing to movie fans, I guess?

It really is a good short and easy introduction to Anglo-Saxon literature.  It gives a nice variety and nothing is very long, so readers don't have to be able to absorb a lot at once.  It's mostly poetry, and has been translated to still conform to the format as much as possible, so it gives a good flavor and doesn't just read as an essay or story.