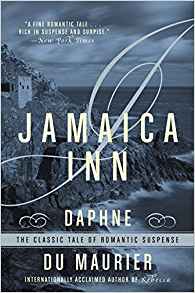 It was a dark and stormy night!  No, really, that's how it starts.  Mary Yellan is traveling to the Jamaica Inn; her mother's dying wish was that Mary go to live with her aunt at the inn.  Uncle Joss, however, turns out to be a terrifying tyrant who is clearly up to some really bad things.  At first, Mary thinks it must be smuggling, but it's much worse.  Mary has few friends to turn to.  There's the quiet-spoken but strange vicar a few miles away, and Jem, Joss' younger brother -- a horse-stealer and a rogue -- and Mary has little chance of saving her aunt on her own.

It's a classic Gothic story, with lots of foreboding, lonely moors, and storms, set...sometime in the 19th century, but it's hard to know when.  I'd guess earlier rather than later.  Mary is a tough, likable heroine.

I must say I didn't love the ending.  It was not a surprise, but it was a bit of a let-down.

This is the second time in less than a month that I've read a novel featuring an albino person as a character.  I've never met anybody in real life with albinism, but it sure is a popular literary trope.

It was an exciting, entertaining novel.  Not my favorite of my du Maurier reads, but pretty good.
20 books of summer English literature Gothic lit TBR challenge