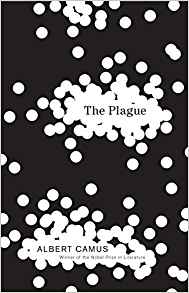 The Plague, by Albert Camus

I've been meaning to read this book for something like 20+ years, and I finally got around to it, and it's about...the plague.  A real honest-to-goodness episode of bubonic plague.  Which is great!  But I had somehow developed the impression that it was a metaphorical, not-actual plague, so I was surprised when it really was plague.

In Oran, a largeish North African port city, in the 1940s, rats start staggering out into the street and dying -- by the thousands.  Nobody quite knows what this could mean, but pretty soon there are a few sick people...and then a lot of sick people.

The story is told by four or five men, but primarily from the perspective of Dr. Rieux.  He sends his wife off to a TB sanatorium just before the outbreak, and he is the first to realize that the mystery illness is plague, and urges quarantine measures and closing the city to reluctant city councilors.  Throughout the epidemic, he works himself to exhaustion, knowing that hardly any of his patients will survive.

We also have:
Through these five men, we see the entire course of about nine months of plague, until the epidemic runs its course and the city is re-opened.  It's all very realist and detailed about how people respond to dire circumstances.

I did not exactly find it an easy read, but it was interesting and I'm glad I finally got around to reading it.  It also has references to both Kafka's novel The Trial and to Camus' own earlier novel, The Stranger, so that was fun.  Very well worth reading.
20 books of summer French literature TBR challenge