Summerbook #10: The Assassination of Brangwain Spurge 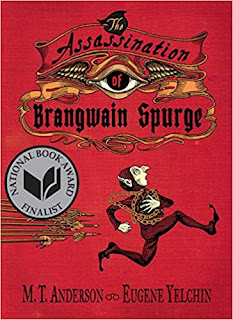 The Assassination of Brangwain Spurge, by M. T. Anderson and Eugene Yelchin

This was such a cool book!  I really enjoyed it.  It's very unusual.

For centuries, the elves and the goblins have been at war with each other, on and off -- mostly on.  Now, the elves are sending a gift to the goblin King as a peace offering -- an ancient carved jewel that they found buried, and that seems to depict a goblin battle.  The emissary is a scholar, Brangwain Spurge, who has studied elf and goblin history.  His goblin host is another scholar, the archivist Werfel; he will show Spurge around town while they wait for an audience with the King, Ghohg the Outworlder.  Werfel is eager to show Spurge his beloved goblin culture and anticipates wonderful scholarly discussions, but it doesn't turn out that way.

This story is actually told from three viewpoints.  Most of the text is Werfel's story from his point of view.  Then, Spurge is sending telepathic visual reports of his experiences back to the elven lands, and we see the print-outs of the images he transmits as chapters of consecutive images.  (These illustrations are very well-done, but they are not printed as clearly as they could be.  At first I thought it was just a disappointing printing job, but when I understood that they were supposed to be print-outs of telepathic images, I realized that they were printed like that on purpose.)  And every so often, we see a letter from the elf official who chose Spurge as the emissary, reporting on the progress of the elves' plan -- not all of which is known to Spurge. 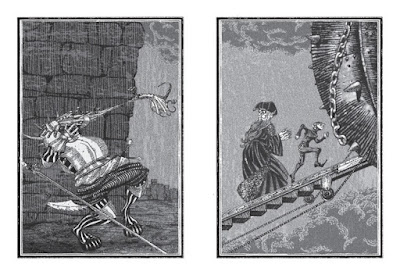 The result is pretty fantastic.  Each character has a limited point of view and is seeing events through his own interpretation, so that it becomes not only an exciting spy/adventure story, but also an exploration of culture shock and the limited perspective with which we all see the world.  (When I was an exchange student, the materials talked about this in terms of sunglasses, as though, say, I come from a place where everyone wears blue glasses, and have arrived in a place where everyone wears yellow.  My glasses will never change completely to yellow, but will eventually become green, and never again will they be all blue.  There must be a pithy phrase for this, but I sure can't think of it right now.)

Also, giant pieces of armor, like in The Castle of Otranto!  And it was a finalist in the National Book Award in the Young People's category last year.  Here is a fun book trailer video:

I'm glad you loved this one! It took me a few pages to figure out what was going on but, once I did, I loved the way it was presented. And the message was great too. Just a fun book all around!

This sounds like so much fun! I'll definitely look it up. Hope your summer is going well!