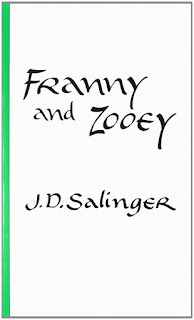 I put Franny and Zooey on my mental TBR list last year, when somebody assured me that I would like it much better than Catcher in the Rye.  (I have read Catcher three times.  I get that Holden is a mess for particular reasons.  But I'm the wrong person to read it; at this point, I read it with Mom Eyes.  I just want to give him a giant sandwich, a glass of milk, a quart of water, and send him to bed.   After he sleeps for 24 hours, I'll make him shower, feed him some more, and give him a job in construction for a year.  He'll feel much better.)

Franny and Zooey turned out to be two short things; the short story Franny, and the novella Zooey.  They're siblings, part of a family Salinger wrote about every so often.  Franny is the youngest, and all six of them are former child prodigies who were featured on the radio all the time.  Franny is at college, and her story shows her visiting her boyfriend for the Yale game weekend.  At the restaurant, though, she acts oddly.  Her boyfriend reveals himself to be kind of a jerk, but she's more preoccupied with her own feelings -- she's been reading The Way of a Pilgrim and pondering the hypocrisy of the world.  She is in fact a bit of a mess and passes out.

We then move to Zooey's novella; he's at the family apartment and so is Franny.  She is having something of a nervous breakdown, and Zooey wants to help her figure things out, but that largely takes the form of lecturing her at incredible length.

Things I noticed:
I can't say that I loved these stories; they were fine, and I got kind of fond, in an exasperated-mom way, of the two siblings.  But I don't really feel that I need to read more Salinger, or that my life was improved by reading  Franny and Zooey.  Maybe I'm a philistine with a total lack of appreciation of American literature.