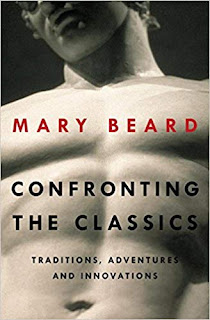 Confronting the Classics: Traditions, Adventures, and Innovations, by Mary Beard

I like books about the classical world (that is to say, ancient Greeks and Romans), especially about reading their books.  I thought this book would be about reading classical literature, but it turned out to be a collection of reviews of books about the classical world, the kind of reviews that are essays several pages in length and that can include many of the reviewer's own thoughts before getting around to the book review part.  So, while it was an OK read, I kind of felt like it was cheating a little bit to collect a bunch of book reviews and not mention that on the back of the book; I was reading about books I've never read and have no wish to read.

That said, many of the essays are quite interesting; it's just that they're also pretty random.  Beard imposes a bit of structure on them by categorizing them into sections that then move chronologically through ancient Greece and the Roman period.  I liked "What Made the Greeks Laugh?" and "Who Wanted Remus Dead? in the earlier pieces.  After that, my favorites by far were in the part called "Rome From the Bottom Up," about the average Joes of Roman society.  There's a good one about a little fortune-telling book that offers randomized answers to common life questions (such as "Am I going to be sold?" or "Am I about to be caught as an adulterer?")

Beard can get pretty acerbic in these reviews.  I had fun with a piece about a biography of Hadrian, which had to imagine quite a bit in order to produce anything that looked like a biography.


To be fair to Birley, he does signal his conjectures, guesses and inferences for what they are. Obsessively so. His text is littered with the technical terminology of ‘careful’ ancient history: ‘presumably’, ‘one may readily postulate’, ‘the odds are that’, ‘it is no more than a guess’, ‘no doubt’, ‘in all likelihood’, ‘on this hypothesis’. Such phrases occur literally hundreds of times throughout the book. The problem with this method is not its dishonesty (though readers should be warned that many of Birley’s terms are used in their narrowest academic sense: ‘no doubt’ means ‘this is an extremely dodgy speculation’). The real issue is that this veneer of scrupulous scholarship (‘I shall claim nothing as fact that I cannot firmly authenticate’) turns out to act as a brilliant alibi for outright fiction: ‘I am at liberty to spin any line I fancy, provided I admit that it is conjecture.’ A biography of Hadrian (or of almost any Roman emperor) stretching over four hundred pages is bound to be largely fiction.

It was fairly enjoyable, but really only relevant to somebody who wants to read an awful lot about the classical world, or perhaps a dedicated Mary Beard fan.
Posted by Jean at 6:00 AM