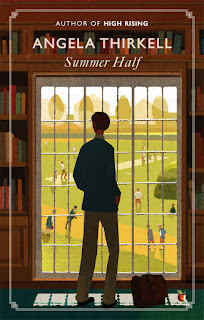 Summer Half, by Angela Thirkell

It's been several years since I picked up any Thirkell novels, but I do love them.  Just the other day Brona read Northbridge Rectory, and somebody else mentioned Thirkell books too, and Sunday was far too sleepy and warm a day to try to read Nabokovian lectures or Chinese literary short stories!  So I picked up Summer Half and had a truly delightful afternoon.

If you're unfamiliar with the Thirkell novels -- she picked up Trollope's fictional county of Barsetshire and wrote contemporary domestic comedies in it.  Really, they are much like updated Trollope novels, with a wide cast of characters going through realistic but essentially happy lives, all given with a large dose of humor.  They are just such fun.

In Summer Half, young Colin Keith is reading law, but decides that a young man ought to be supporting himself, so he gets a job as a junior Classics Master at a prep school.  Nobody notices how noble and self-sacrificing he is being, but his term at school is good experience for him, and there he meets: Philip Winter, moody young Communist unhappily engaged to the headmaster's daughter --  Everard Carter, head of house, who falls in love with Colin's sister Kate but is convinced she loves the sophisticated -- Noel Merton, and lots of other people.  And Colin's youngest sister Lydia is one of my favorite Barsetshire characters of all time.  They eventually sort themselves out.

Virago is currently re-publishing the Thirkell novels in this very pretty format, which you can see above.  This is not at all what my copy looks like; mine is a pocket paperback from the 1980s with a painting of what look like mid-Victorian ladies at a dinner.  Since the story is set in about 1937, it's a bit misleading!

It was such a nice break from my other 20 Books of Summer reads that I might have to sneak some more in....
comedy English literature